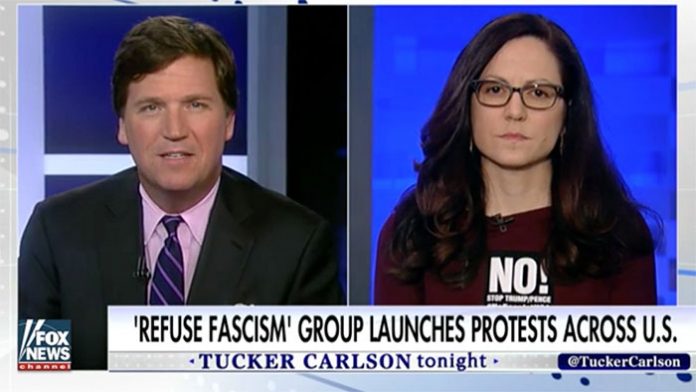 Tucker Carlson tried to have a normal debate with one of his guests. However the debate went south when she compared Trump to Hitler.

Sunsara Taylor is an organizer for ‘Refuse Fascism’. Refuse Facism is a group that has launched protests across the country to fight the ‘fascist Trump regime’. So straight away you can see she isn’t exactly the most pro-trump guest Tucker will ever have on.

Tucker Carlson did try to have a civil debate with this woman, but as you can see all she has in her vocabulary is ‘fascism’, ‘dangerous’, ‘Hitler’ and ‘Nazi’.

Tucker Carlson responded to this woman’s comparisons by arguing that that if she truly believed Trump was like Hitler,then she wouldn’t be appearing on a television show, she’d be committing acts of violence.

She then responded to this by doubling down on her comparisons and saying “Unlike Hitler, Trump has the nuclear codes, so he could arguably be worse than Hitler“.

“He is more dangerous than Hitler ever could have been,” she said. “I’m calling for mass political protest and resistance.”

Tucker pressed her to explain what she’s going to do other than “jump around in the street with a sign in your hand.”

“This is silly,” Tucker said. “You don’t oppose fascism with political resistance. But whatever. You may not know that.”

This woman then doubled down on the Hitler comparisons even more,by saying that  “Trump and Pence are operating out of “Hitler’s playbook” and her group is refusing to accept a “fascist America.” She then said that in order to achieve her goal, she wants a coup d’etat to drive Trump out of office.

The Social Media Response to this woman’s comments was even better than the actual video itself.

@ssal662017 @TuckerCarlson @SunsaraTaylor @realDonaldTrump @FoxNews yes wonder what meds she was on.

@PWessinger @TuckerCarlson @SunsaraTaylor @realDonaldTrump @FoxNews Frightening she walks among us.

Still dizzy from all of Sunsara Taylor's manic rantings, @MissJitter! The only reason Tucker Carlson had her on was to laugh at her. #Tucker

@TuckerCarlson @SunsaraTaylor @realDonaldTrump @FoxNews yeah..well she needs to be driven to an asylum. ..seriously.

At the end of the day its people like this that got Trump elected. The more they lie about him and attempt to portray him as something he is not,the more he and are country will keep on winning. If this is the so called resistance then 2018 and 2020 are looking good for our President and our country.