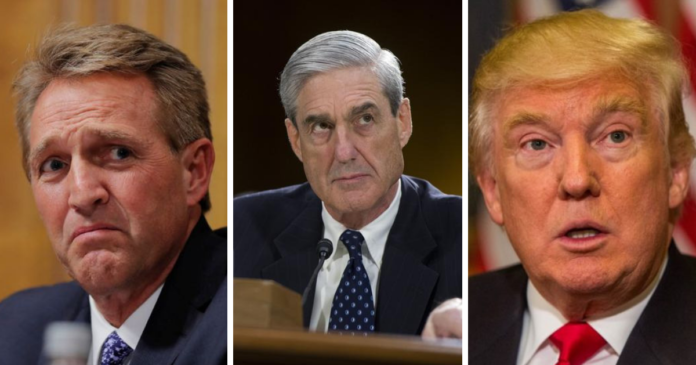 Republican senator, Jeff Flake, is getting ready to retire…but he has a few plans before he goes. He announced a cross-party plan on Thursday that would force a vote on legislations to prevent Robert Mueller from being fired.

Whitaker is now under pressure to recuse himself from overseeing the probe because of his past criticisms, but has made no indication that he would step aside.

On Thursday Flake said he and Coons would demand a vote on a bill already approved by the Senate Judiciary Committee which would order a 10-day window for any firing to be reviewed by a judge – and rescinded if there was not “good cause.”

The move by Flake and Coons will most likely fail because the senators’ demand for a vote can be vetoed by any other member. A Trump loyalist could earn favor with the president by blocking it.

The House Judiciary Committee Democrats wrote a letter saying that Trump’s move to fire Sessions placed the country “in the throes of a constitutional crisis.”

Trump named Sessions’ chief of staff, Matthew Whitaker, as acting attorney general, and said he would soon nominate a permanent replacement for review by the Senate.

The Democrats said they also want the Justice Department to protect the integrity of Mueller’s investigation and to preserve relevant documents.

“The forced firing of Attorney General Sessions appears to be part of an ongoing pattern of behavior by the president seeking to undermine (the) investigation into Russian interference,” said the letter from the Democrats.

“The president’s actions have plunged the country into peril,” the Democrats added. “By forcing the firing (of) the attorney general, the president now threatens the rule of law itself.”

Senate Democrats presented a CNN op-ed as evidence that Whitaker must also recuse himself from Mueller’s probe during his temporary appointment.

“Given his previous comments advocating defunding and imposing limitations on the Mueller investigation, Mr. Whitaker should recuse himself from its oversight for the duration of his time as acting attorney general,” Senate Democratic leader Chuck Schumer said immediately after his appointment. Cory Booker, a New Jersey Democrat and likely challenger to Trump in 2020, agreed with Schumer.

“Matt Whitaker should recuse himself from supervision of the special counsel given his past comments targeting the Mueller investigation and advocating for limits on its scope and cuts to its funding,” Booker said.