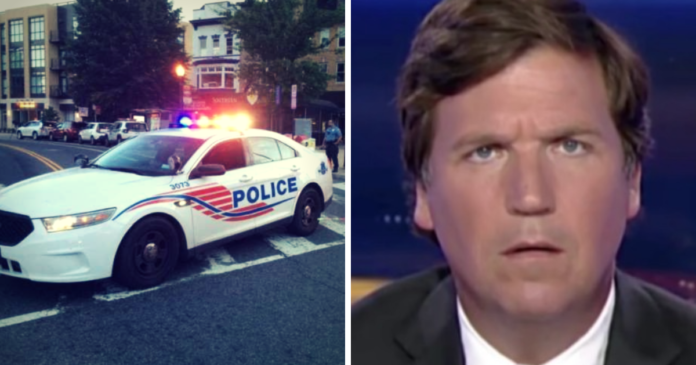 The police in Washington D.C. are investigating a mob protest from the left-wing that took place at Fox News host Tucker Carlson’s house on Wednesday evening. It is a “suspected hate crime,” with “anti-political” motivations, according to a police report.

The mob was organized by the Antifa group “Smash Racism DC.” It posted Carlson’s Washington address online and sent a mob to his house calling him a “racist scumbag.” They also demanded that he flee the city. Carlson was at the Fox News studio when the mob arrived at his home.

Carlson’s wife, who was home alone at the time, reported that she heard loud banging and pounding on her front door. She called the police after witnessing a large group of people that had a bull horn and were yelling loudly outside the house.

The police “arrived on the scene and found a group of approximately 20 people,” the report read. “It was discovered that unknown persons spray painted an anarchy symbol on the driveway. There were also signs left on the vehicles parked in the driveway as well as a sign left on the front door of the home.”

The police also seized six hand-written posters from the scene, some of them said: “Tucker Carlson we will fight! We know where you sleep at night!”

“Tonight you’re reminded that we have a voice,” Smash Racism DC wrote in a now-deleted Tweet. “Tonight, we remind you that you are not safe either.”

No arrests were made after police arrived on the scene, though there is an active investigation into the incident, Metropolitan Police Department spokeswoman Alaina Gertz said.

“MPD has allocated more patrols in the area as a response to this incident,” she commented.

In a second publication, Gertz added: “We welcome those who come here to exercise their First Amendment rights in a safe and peaceful manner; however, we prohibit them from breaking the law. Last night, a group of protestors broke the law by defacing private property at a Northwest, DC residence. MPD takes these violations seriously,  and we will work to hold those accountable for their unlawful actions. There is currently an open criminal investigation regarding this matter.”

Smash Racism DC co-founder Mike Isaacson wrote on his blog that an active member of the group notified him that the personal information of Carlson and other “far right personalities” had been obtained.

“SRDC has really been on fire with the doxxes as of late,” Isaacson wrote. “Anyway, last night my SRDC comrades engaged in what’s known as ‘grassroots lobbying’ – showing up at a powerful person’s doorstep, usually at night, and generally making as much noise as possible.

Isaacson said in a tweet Thursday that he supported Wednesday night’s mob. “I haven’t worked with Smash Racism DC in three years but support their actions. Thanks for playing.”

“It wasn’t a protest. It was a threat,” Carlson told The Post.