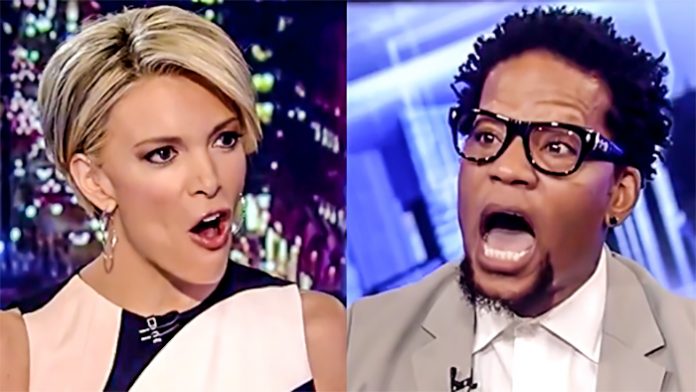 We all know Black Lives Matter as the group that advocates for (then denies advocating for) killing cops, rioting, and inciting violence against those living in their own neighborhoods. They operate on assumptions of racism, even though the vast majority of their protests are based on bald faced lies.

I wonder what would happen if one of Black Lives Matter’s most staunch supporters got confronted with he truth. Well, as it so happens, Megyn Kelly did just that, on her show, The Kelly File. Her guest was the ultra-liberal comedian and actor, D.L. Hughley, who made a career making fun of black people but now feels compelled to tell everyone else how wrong they are for pointing out flaws int he black community. Yeah, a liberal that doesn’t practice what he preaches. Rare, I know.

Kelly grills him on the fact that Ferguson’s “Hands up, don’t shoot” was a total lie and that it’s the agenda of Black Lives Matter idiots like Hughley to jump to conclusions when facts aren’t in yet.

I’m not the biggest Kelly fan, but she nailed it and didn’t give him an inch!

Whoa, that was rough. I do applaud Hughley for going on Fox News, but I bet he left feeling a bit more sore than he’d bargained for. HA HA!

Share if you’re not afraid of saying that Black Lives Matter is a hate group!