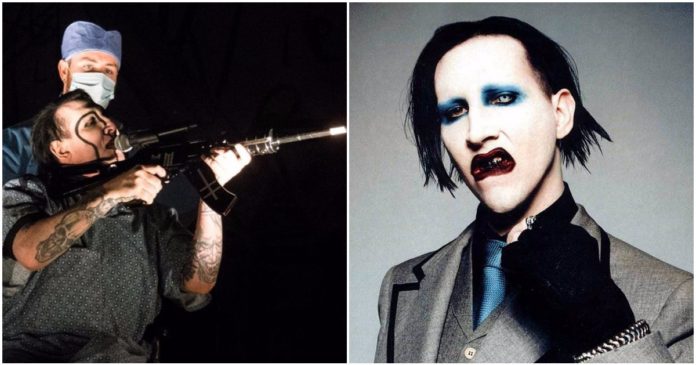 It’s always been a tactic in the music industry, but in the 1990s, bands and artists began utilizing the shock factor as a means to gain popularity. Whether that meant wearing outrageous outfits, writing crazy lyrics, or both, having parents around the country telling their kids not to listen to your music actually became a good thing to a point.

One of the most infamous of these shock artists is Marilyn Manson, who’s struggling to maintain a shred of relevancy in 2017. This guy has always dressed up like a creepy, genderless ghoul and engaged in/sung incredibly degenerate things. Parents were terrified of the guy back in the day, and rightfully so, his music was/is trash and everything about him is cultural cancer.

With his star completely faded, Manson has tried to capitalize on the anti-Trump fervor, officially jumping on the left-wing “Resistance” train. And at his latest concert, he courted controversy with his most ridiculous act in a while.

As reported at the Sun, during a concert in San Bernardino, California, a city that suffered an Islamic terror attack just a few years ago, Manson pulled out a fake assault rifle while on stage and pretended to mow down the crowd.

The “Beautiful People” singer pointed the rifle at the crowd while singing his newest track “We Know Where You F****** Live.” Apparently, Manson was trying to be ironic, and make fun of the fact that he, and other artists like him, were blamed for school shootings and kids rebelling/doing bad things in their adolescence.

His gun-totting scheme is linked to an interview he gave earlier this year, where he blamed Columbine, and the reaction to it, for ruining his career.

“Certain people blame me for the shootings at schools — I think my numbers are low, and hopefully they go up on (my upcoming) record,” said Manson, according to New York Daily News. “But, honestly, the Columbine era destroyed my entire career at the time.”

His stunt has caused a lot of buzz in recent days, much of it negative, which prompted the shock jock to release a statement explaining his actions:

“In an era where mass shootings have become a nearly daily occurrence, this was an act of theater in an attempt to make a statement about how easily accessible semi-automatic weapons are and how seeing them has become normalized. My art has always been a reaction to popular culture and my way to make people think about the horrible things that happen in this world. My performance was not meant to be disrespectful or show any insensitivity.”

The “art” Manson claims he makes is anything but. The guy parades around in gallons of makeup while belting out angsty lyrics that sound like the writings of a pubescent teenager. He’s a clown, and nothing more.

It’s especially ironic to see people like him, and all the punks bands that used to rail against the government and live on the edge of counter-culture, fully embrace and become the spokesman for the popular culture they always used to position themselves against.

They can pretend that they’re “edgy” and “controversial” all they want, but in the current year, there’s nothing less controversial than parroting left-wing garbage. In fact, it’s the safest thing an “artist” can do.