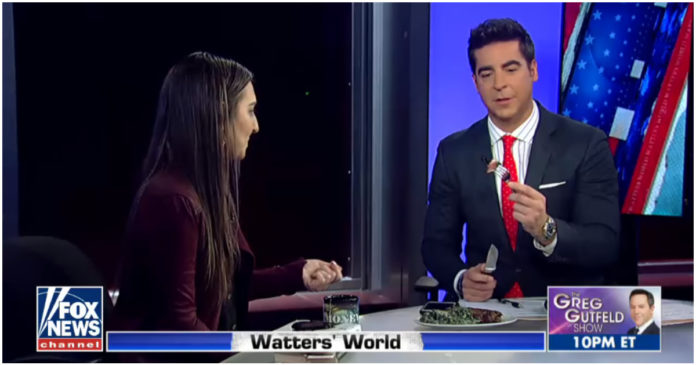 Fox News is the lone conservative network in a sea of left-wing lunacy, and for years has dominated the ratings. While the network has been home to some excellent conservative commentators, few are as good at trolling leftists as Jesse Watters.

Watters previously worked with Bill O’Reilly, but since his departure, he’s gained a more prominent role. With his newfound screen time, he’s made a habit of destroying liberals arguments and leaving them speechless, which is exactly what happened during a recent interview with a vegetarian feminist.

As reported at the Daily Caller, during a December 17 discussion with a radical feminist about the horrors of “toxic masculinity” and how meat, yes meat, reinforces the “problem,” Waters triggered the woman by munching on a steak that was delivered in the middle of their conversation.

“Eating meat holds a lot of symbolism and it’s really too much to explain in four minutes,” Parsons says before explaining that all of our “individual level decisions” are “fundamentally political acts.”

Watters’ was beginning his response to the absurd claims when a staffer entered the screen carrying a steak and vegetables. She sets it down in front of Watters who begins digging in.

“So I’m having a steak right now because I’m starving,” Watters announces. With a smirk, Watters then listens to more lecturing from the “professor” about the ethics of eating meat. She also went on to advocate for “universal health care for animals” while Watters sat there enjoying his steak dinner.

These are the kind of ideas the Left’s peddling these days. They expect us to take seriously their whining about “toxic masculinity” when it’s a fact that never in human history has there been less masculinity than there is now. It’s practically a crime to pursue traditionally manly endeavors, and this clown wants us to believe that eating meat somehow damages society because it’s associated with manliness and because animals deserve rights similar to our own. Talk about completely unhinged from reality.