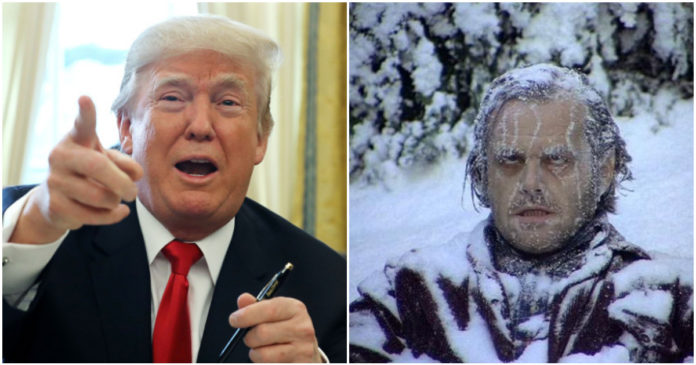 With Christmas is finally at an end, the new year is just around the corner. Winter is just really getting underway but right now, many parts of the US are enduring some seriously cold weather.

Related to the issue of cold weather is debate over global warming. “The science is settled!” is what leftists love to say, however, practically every single sky-is-falling prediction made by the global warming cult has failed to materialize. Our coastal cities are still above water, and the ice caps nowhere near melted, as the failed presidential candidate and self-proclaimed inventor of the Internet Al Gore promised.

As reported at the New York Post, Trump has made a habit out of mocking the Left on many of their pet issues, but few rankle them as badly as when he goes after them on the science behind global warming.

With all the severely cold weather, President Trump took to Twitter Thursday to mock the so-called science behind the global warming fear-mongering brigade, saying that it looks like the East Coast could actually use some of the warming they’ve been promising for the last 2 decades.

“In the East, it could be the COLDEST New Year’s Eve on record,” Trump noted about the freezing temperatures in New York and other cities.

“Perhaps we could use a little bit of that good old Global Warming that our Country, but not other countries, was going to pay TRILLIONS OF DOLLARS to protect against. Bundle up!”

The weather forecasts for the Big Apple heading into the new year look to be below freezing as well, as the cold front is far from over. The president’s reference to the trillion dollars in the tweet was a very clear shot at the Paris Accords, which he has promised to pull the US out of.

Members are supposed to hit all sorts of agreed-upon benchmarks for carbon emission reductions and clean energy advancement, regardless of how it affects energy prices for their citizens.

Trump’s tweet has elicited a predictable amount of outrage, with the usual trotting out of the “97 percent of scientist agree” canard the Left loves so much. Of course, that number is misleading, and even if it wasn’t, it doesn’t automatically make them right in the first place. More stock will be placed in scientists’ claims when they stop provenly peddling propaganda and junk science just so they can keep their grant money and justify their research’s existence. That, and when a few of their predictions actually come true.