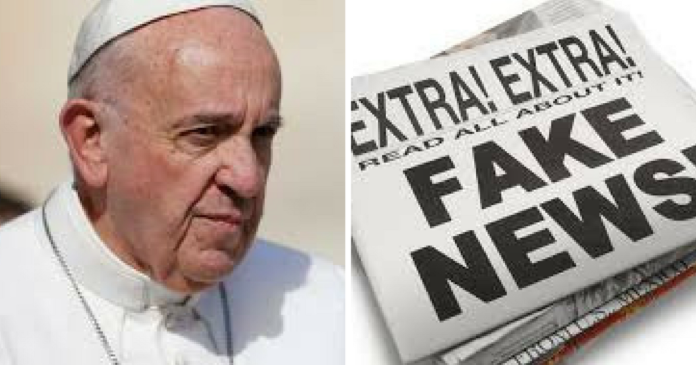 Pope Francis denounced fake news as “evil” Wednesday, urging parishioners to slice through the doublespeak and seek the truth.

“Fake news is a sign of intolerant and hypersensitive attitudes and leads only to the spread of arrogance and hatred. That is the end result of untruth,” Francis said wrote in a document titled “The truth will set you free – Fake news and journalism for peace.”

American politicians don’t know how to deal with fake news. The hazy days of yellow journalism are gone; networks like CNN and MSNBC seem respectable. So when their pundits start blathering about made-up connections between Russia and the Trump campaign, people listen. Traditional news networks still have authority.

President Trump is one of the few high-ranking officials willing to take on the media behemoths. Most politicians are too afraid to challenge the system. “Fake news” is on everybody’s mind because Trump put it there.

“This false but believable news is ‘captious’, inasmuch as it grasps people’s attention by appealing to stereotypes and common social prejudices, and exploiting instantaneous emotions like anxiety, contempt, anger, and frustration,” Pope Francis wrote.

“We need to unmask what could be called the ‘snake-tactics’ used by those (purveyors of fake news) who disguise themselves in order to strike at any time and place… Amid feeding frenzies and the mad rush for a scoop, they must remember that the heart of information is not the speed with which it is reported or its audience impact, but persons.”

Fake news is derailing the government. For more than a year now President Trump has been forced to put up with a witch hunt. Democrats started yammering about collusion one day and suddenly the story had a life of its own.