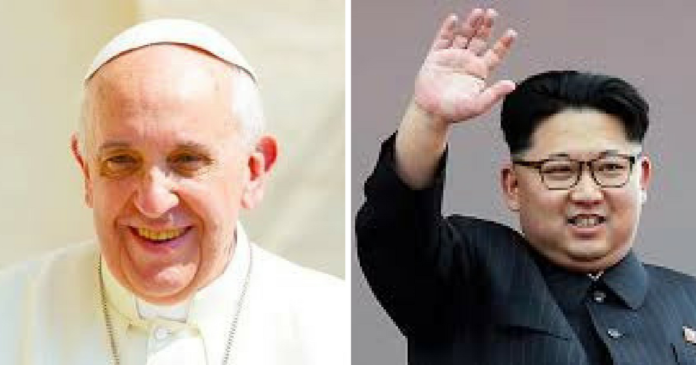 Pope Francis stood before nearly 200 world ambassadors Monday and urged greater cooperation and compassion. Diplomacy, he believes, is the only thing that will prevent a war with North Korea.

“Francis has voiced rising alarm about the threat of nuclear conflict in the Koreas, asserting at a special Vatican nuclear conference in November that there simply is no reason for an atomic arms race and every reason to destroy existing stockpiles,” Francis told a rapt audience.

Francis has been an unusually political Pope. He’s expressed controversial opinions on multiple subjects, causing some orthodox believers to doubt his commitment to the faith.

According to ABC News he “called for governments to provide universal health care for all, demanded they respect commitments made in Paris in 2015 to curb global warming, urged them to better integrate migrants and to participate in a ‘serene and wide-ranging debate’ on nuclear disarmament.”

The Trump administration is at odds with every single one of his goals. He’s already withdrawn from the Paris climate change agreement, slashed the number of refugees allowed to resettle in America, and has multiple times expressed a wish to expand our nuclear armament.

The Pope also touched upon Trump’s decision to recognize Jerusalem as Israel’s capital. Mentioning the “recent tension” in the area, he called for a two-state solution and emphasized Jerusalem’s significance.

Pleading for more patience in the Middle East took up so much time that he was forced to gloss over Central and South America.

“Francis’ sole mention of his native Latin America was over the deteriorating humanitarian situation in Venezuela,” notes ABC.