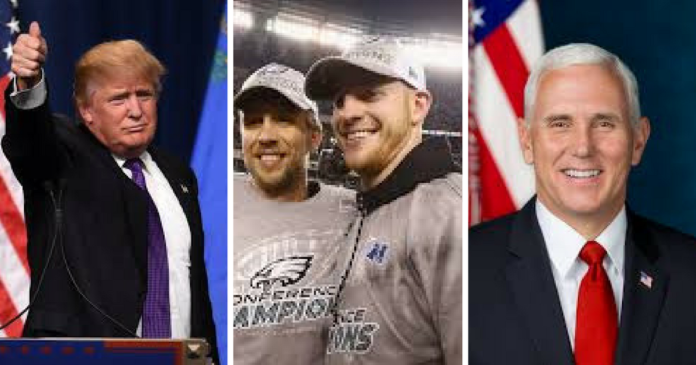 While the Eagles and their fans are still riding the high of a Super Bowl victory, the team’s starting quarterback, who saw his season end before the playoffs due to injury, is making big plans on the side.

Carson Wentz and his Super Bowl MVP teammate and replacement, Nick Foles, are both outspoken Christians, much to the chagrin of far too many folks. While Foles has been earning hate for publicly sharing his faith in the aftermath of the big game, Wentz is likely to join him in the eye of the storm as he’s about to attend one of the Left’s most hated White House traditions.

As reported at the Hill, Wentz will be making the keynote speech at this year’s National Prayer Breakfast on Thursday, replacing Vice President Mike Pence.

Rep. Kevin Cramer (R-ND) told local media on Wednesday that Wentz, who attended North Dakota State University, will replace Vice President Pence at the event. Pence is currently in South Korea, where he’ll lead out the United States athletes during the opening ceremony of the Winter Olympics.

Before tearing his ACL, Wentz led the Eagles to the number one seed in the NFC. The team’s championship hopes seemed dashed until backup Nick Foles led them to an improbable trip to the Promised Land and upset over the New England Patriots.

The news of Wentz’s speech comes just after several Eagles’ players have declared they won’t be attending the traditional White House trip after winning the Super Bowl, due to their distaste for Trump.

While they’ve been heralded as brave for seemingly taking a stand, Wentz will likely be targeted with abuse for not only going to the White House, but for speaking at a Christian prayer breakfast, which is just unthinkable to leftists.

But none of the crying that the media does about his or other Christians’ faith seems to bother Wentz. He’s going to need that thick skin if he’s going to survive the long career in the NFL as a man of faith.