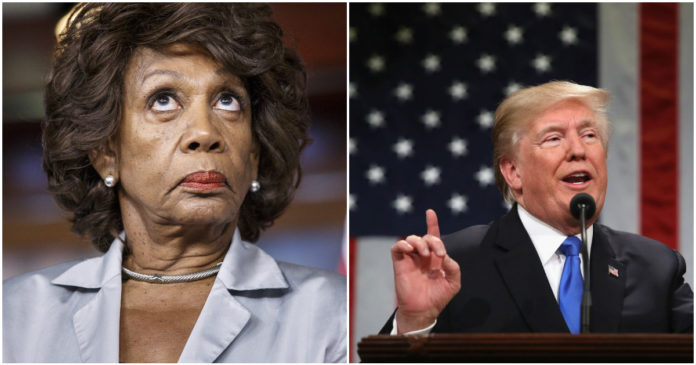 Trump’s fantastic first State of the Union speech has drawn all the hate you’d expect in the days since. While surveys have shown the overwhelming majority of Americans approved of the speech, leftists are doing everything they can to insult the president and push their deceitful narratives, rather than actually address the policies they hate so much.

The reason being, of course, is because they know their agenda is a losing one, at least when presented honestly. In the wake of Tuesday’s speech, Democrats have been making the media rounds and wringing their hands over the president’s remarks and leading the way has been one of Congress’ most disgraceful members.

As reported in the Daily Mail, Democratic Rep. Maxine Waters thinks that President Donald Trump‘s public remarks should come with a parental advisory.

In her response to Trump’s speech, Waters appeared on the laughable Black entertainment Channel (BET), where she called him a racist and said he’s a “terrible role model for our children.”

“Whenever he appears on TV there should be a disclaimer that says “This may be may not be acceptable for children,” she said. Waters and her comrades have been pushing for Trump’s impeachment since day one, and they’ve ramped up their calls since the immigration push began and the media falsely reported that Trump called third world nations like Haiti “sh**hole” countries.

Trump has denied he said such a thing, as have his associates, but that didn’t stop Waters from referencing the incident during her raving response. Waters said his “vulgarity and his disrespect for women and people of color” warrants a disclaimer.
Adding that “it’s impossible to believe” Trump when “he tries to declare that he wants to bring the country together” because he has “divided the country in ways that no other modern president has done.”
“One speech cannot and does not make Donald Trump presidential. He’s not presidential and he never will be presidential. He claims that he’s bringing people together but make no mistake, he is a dangerous, unprincipled, divisive, and shameful racist,” she said.
Waters said her remarks are not just a response to Trump’s State of the Union speech, “They are a warning to the American people – a warning that this president does not deserve to represent us, and that he’s taken America down the road to isolation and division.”
Waters closed off her incoherent rant by reiterating her belief that Trump should be impeached saying, “The time is now. We must organize, challenge and resist.”
He may not represent you, Maxine, but he’s representing the folks that put him in office. You and your limp-wristed allies can “resist” all you want, but it won’t change the fact that the public supports his agenda, despite years and years of constant propaganda via every media outlet telling them that they’re evil bigots if they support it. The nation wants a president that puts US citizens first, not a bunch of traitorous should-be villains leading an invasion of the US.