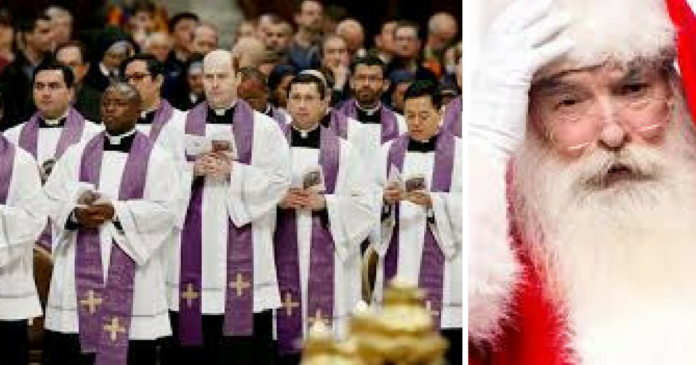 It’s an undeniable fact that the Christmas has largely been turned into a giant consumerist event that completely overshadows that true meaning behind the holiday. A huge battle in the culture wars has been waged over the holiday and it shows no signs of letting up.

One thing is for sure, the perpetual losers year after year are Christians. Not only has one of their biggest times of celebration been taken over by reindeer and fat bearded man, but leftists have slowly been chipping away at our ability to even say the words “Merry Christmas!” Since Christmas has been taken over by “Santa and reindeer,” a Catholic priest in Ireland thinks that Christians should take an interesting step to protest this sad reality.

As reported at the Express, Father Desmond O’Donnell said Christians of all denominations should realize that Christmas and Easter no longer have any sacred meaning thanks to the constant undermining of them by various cultural forces.

While it may initially anger believers to hear that, his reasoning is very sound, as wants to preserve the true essence of these holidays. He only thinks that it’s not possible to do so thanks to what folks now associate with the names/holidays.

He told the Belfast Telegraph: “We’ve lost Christmas, just like we lost Easter, and should abandon the word completely. We need to let it go, it’s already been hijacked and we just need to recognise and accept that. I am simply asking that space be preserved for believers for whom Christmas has nothing to do with Santa and reindeer.”Father O’Donnell continued to explain: “My religious experience of true Christmas, like so many others, is very deep and real – like the air I breathe. But non-believers deserve and need their celebration too, it’s an essential human dynamic and we all need that in the toughness of life. I’m just trying to rescue the reality of Christmas for believers by giving up ‘Christmas’ and replacing it with another word.”
He added, “I’m all for Christians choosing to celebrate Christmas by going out for meals and enjoying a glass of wine, but the commercialisation of anything is never good.”Father O’Donnell made sure to clearly say that he’s not at all trying to criticize non-Christians, just that he would like to ensure that the true meaning behind the holiday isn’t lost and for those that still celebrate it to not feel discriminated against.

He also said that the church is failing to understand or address the reality that Christmas in the current year is far removed from the Christian one. He believes that “secularisation and modern life will continue to launder the church” should nothing be done about it.

The priest’s words come in the aftermath of controversy after a company replaced the baby Jesus with a sausage roll in a nativity scene for an advertisement. Christian groups lambasted the double standard by pointing out the fact that no company would dare insult any other religion in such a fashion.
In response to the ad, Rev Mark Edwards of St Matthew’s Church in Dinnington and St Cuthbert’s Church in Brunswick said the company had been “disrespectful”.

He said: “It goes beyond just commercialism, it’s showing a total disregard and disrespect towards one of the greatest stories ever told, and I think people of all faiths will be offended by this.”

Edwards and O’Donnell understand that modern society has drifted far away from its Christian moors. It goes far beyond a preference of observance, as liberals show downright hostility to anyone that shows an inclination to celebrate the true meaning of Christmas. It’s a disgusting reality, but one that must be faced if we want future generations to even know what the holiday is all about.