This comes as a surprise to me, only because Obama’s political influence is dwindling and the world sees him for the sympathetic monster he really is.

In a U.N. meeting earlier, Obama spoke about the role of the US military in ISIS-led Syria and how to eliminate the threat. When countries like China and Russia spoke up and pointed out that had it not been for Obama’s intervention in the country at first, ISIS would have never existed, Obama rejected the notion outright and gave out vague statements, like always. 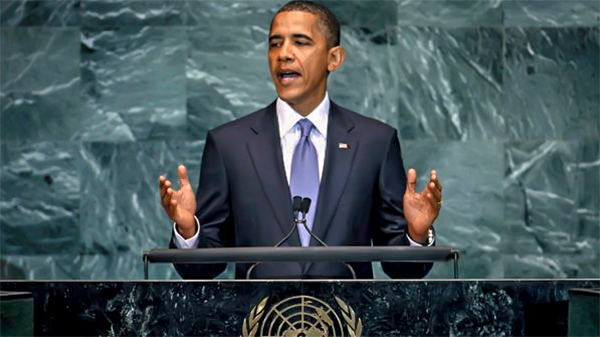 On the subject of Syria, Obama said the U.S. will not apologize for its use of force against the Islamic State (also known as ISIS or ISIL), but that internal cooperation will ultimately be needed to heal the country.

He said the U.S. stands ready to work with any nation—including Russia and Iran—to resolve the conflict, but he called for recognition that returning to the “pre-war status quo” is not the right solution. Russia has advocated supporting Bashar al-Assad’s reassertion of dominance over the country as a means to combat the extremist groups operating in Syria.

I can’t believe I’m saying this, but it makes perfect sense to install the leader that kept these psychos at bay.

“Let’s remember how this started,” Obama said. “Assad reacted to peaceful protests by escalating repression and killing that in-turn created the environment for the current strife.”

The president argued that political realism demands compromises to defeat the Islamic State—as Moscow argues—but that it also requires a “managed transition” away from Assad and to a new leader.

Sure, let’s also remember that the peaceful protests were led by those who went on to form ISIS, in a country with no freedom of speech and Sharia Law as the people’s choice for solving problems. At this point, it just looks like Obama has dug himself into a deep hole and is trying to dig himself out with no hope. I can’t wait until he’s out.