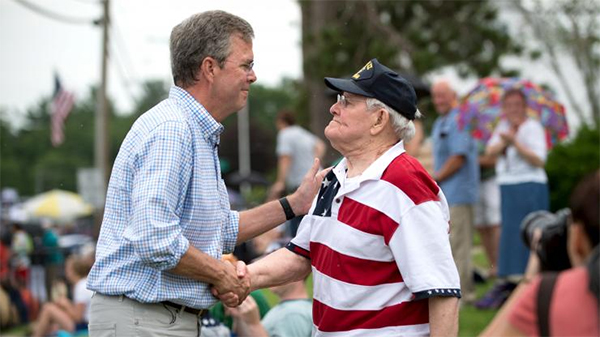 Jeb Bush isn’t at the top in the polls for the Republican candidacy for president, but that doesn’t mean he has no firepower in his arsenal. Veterans Affairs (VA) is a hugely important issue and Bush just opened up about his new VA policy that he hopes will make him the veteran friendly candidate.

Expanding “choice” options for care outside the department without cutting funding for VA hospitals and medical staff.

This is great, but what else is there?

He promises that extra funds can be found through ‘cutting excess administrators (not caregivers)’ and eliminating ‘billions of dollars in waste, fraud, and abuse.’ That includes more competitive bidding for department contracts and firing poorly performing employees.

‘Ample resources exist within the VA budget to improve the quality and scope of care,’ Bush’s policy paper states. ‘In other government agencies, common-sense reforms have saved billions. The VA must get its house in order and send savings into improving veteran choice and veteran care.’

Amen to that last point because the liberals and Obamacare haven’t done a damn thing.

I urge you to read over his full paper at the link above, and help liberals to understand that this is an important issue and they should not be silent when it comes to your veterans!