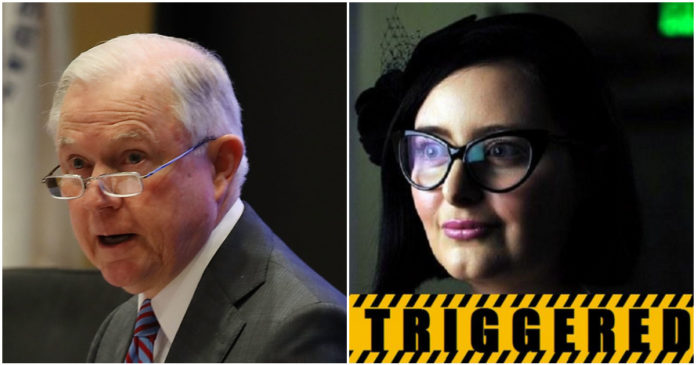 If you’re a conservative in the United States, or really just a human being, you should have already noticed the very transparent war against all things “white” being waged by leftists. Nothing’s as evil as being a cis-gendered white male in the current year, and if you happen to fall into this category, please make your obligatory reparations payments out to your local NAACP chapter.

All the hand-wringing the Left does about racism is just that, as it’s nothing more than an attempt to gas-light and concern-troll folks into self-flagellating over offenses committed by their ancestors. They’re trying to destroy anything remotely tied to evil whitey, as it, along with Caucasians’ existence, is offensive to the world apparently. Trump and his administration have routinely been labeled racist and accused of “perpetuating whiteness” and all sorts of other Orwellian jazz. But unlike most of the spineless morons that have been leading the GOP over the years, his administration isn’t afraid to trigger leftists by throwing their one-sided identity politics’ game back at them.

As reported at the Daily Caller, it seems there’s nothing that doesn’t trigger leftists these days, as the latest word causing them to flee for their safe spaces is the horrifying and offensive term “Anglo-American.”

On Monday, US Attorney General Jeff Sessions used the spine-tingling word when talking about the sheriff office and how important it is to America.

“The office of Sheriff is a critical part of the Anglo-American heritage of law enforcement. We must never erode this historic office,” Sessions said at the National Sheriffs Association Conference. These few words have sent prominent leftists into hysterics, as they’re taking it as proof that Sessions is a bonafide, cloak and hood wearing, white supremacist.

“Like I said previously: HE IS A WHOLE WHITE SUPREMACIST!!!!!!!!!!! Y’all this is a direct quote,” tweeted CNN contributor Symone Sanders.

“Jeff Sessions literally called sheriffs a ‘critical part of the Anglo-American heritage of law enforcement’. WTF is happening America?? How is this right? How is this American?” whined popular anti-Trump tweeter Brian Krassenstein.

“Do you know anyone who says ‘Anglo-American heritage’ in a sentence?” asked Democratic Hawaii Sen. Brian Schatz. “What could possibly be the purpose of saying that other than to pit Americans against each other? For the chief law enforcement officer to use a dog whistle like that is appalling. Best NO vote I ever cast.”

Take a moment to collect yourself after reading such an asinine comment from a man devoid of self-awareness or shame. From a left-wing zealot that spends every waking moment Balkanizing the US into fragmented groups so he can pander to their delicate sensibilities while calling others bigots for not doing the same.

While invoking Anglo-American should never ever be considered offensive, what makes the left-wing reaction to what Sessions said more amusing is that one of Obama’s Department of Justice comrades said the same thing in 2016.

Whether leftists like it or not, America was founded by British colonists, and other than slaves (and subsequent free blacks), the country was almost exclusively white until the passage of the Hart-Celler Act in 1965.

Yes, this fact disgusts leftists, who are clearly doing everything they can to right this wrong in not only the US, but across Europe. But no matter how badly it triggers them, it won’t change history, nor should it stir up any guilt within the hearts of all the evil white folks still daring to exist in the current year.