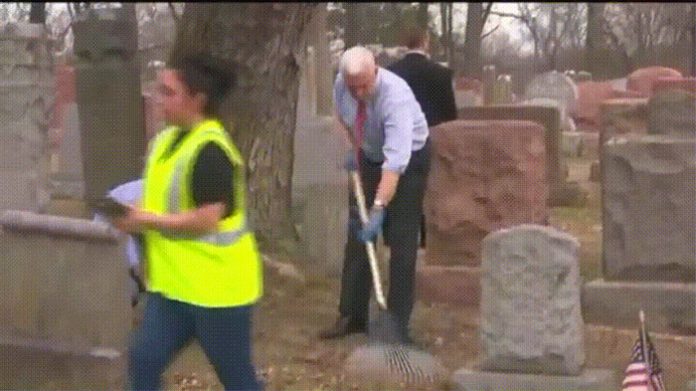 The left loves to demonize people. President Trump is of course their number one target, but following a close second is Vice President Mike Pence.

Pence shouldn’t be demonized. He wants what’s best for the country and the American people, but the left seems to think that he wants to destroy this country right along with Trump. That, of course, is overwhelmingly false and there’s no larger proof of this fact than what Mike pence just did.

As Jewish tombstones were vandalized in a historic cemetery in St. Louis, Missouri, Pence visited the site to pledge his support for eradicating this hatred.

Pence decried the vandalism as “a sad reminder of the work that still must be done to root out hate and prejudice and evil” during a speech earlier Wednesday in St. Louis.

After his remarks at the cemetery, the vice president and the governor listened to a prayer from a rabbi and then cleared brush with volunteers taking part in a beautification project.

This of course goes against everything you hear about Pence in the liberal media. Pence is compassionate and NOT an evil person. He’s championing trust, faith, love, and kindness. If he wasn’t, he wouldn’t be at a Jewish cemetery as a devout Catholic man.

Moral of this story? Don’t believe anything you hear from the left. It’s most likely a lie.