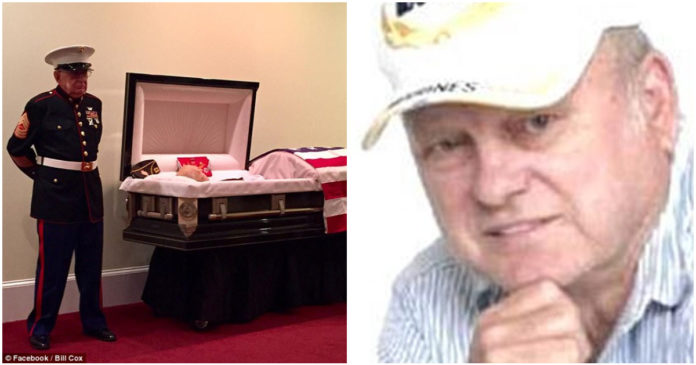 With all the controversies and sky-is-falling news coverage, it’s nice to sometimes take a break from the day-today negativity that plagues our airwaves. Watching leftists from Hollywood to their East Coast cities foam at the mouth and preach down to us uncouth, backward residents of flyover country can get pretty tiresome.

It can make everything feel hopeless, like there aren’t many good people left. However, that’s just the distorted perception the media feeds us, which is barely reflective of reality. And that’s exactly why we need to consume more stories like that told by retired Marine Master Sgt. William H. Cox.

As reported at the Daily Mail, the 83-year-old retired Marine kept a promise he made to a fellow officer while they were hunkered down in a bunker during the Vietnam War.

Cox and Retired Marine First Sgt. James ‘Hollie’ Hollingsworth were taking cover from rockets and mortars in the Marble Mountains during the war on New Year’s Eve in 1968.

At the time, the two were total strangers, but they decided then and there that should they survive the onslaught, they’d contact each other every New Year’s Eve. Over the next five decades, both men kept their promise, as they would close out every year by catching up.

Earlier this year, Cox traveled from his home in Piedmont, South Carolina to see the 80-year old Hollingsworth in Hephzibah, Georgia. He made the journey because his dear friend was dying, and he wanted to meet Hollingsworth one last time to say his goodbyes. While visiting, Hollingsworth asked for a final promise from Cox–that he would stand guard over his casket and deliver the eulogy at his funeral.

Needless to say, Cox accepted. “I said, “Boy, that’s a rough mission you’re assigning me to there,”‘ Cox told Greenvilleonline.com.

Hollingsworth’s son shared a picture on Facebook of the two men from the July visit with the caption, “Two great Marines were reunited once again. These two flew over 200 missions on the same Huey in Vietnam. I have always been proud of my father and his service to our Country. Love hearing the stories from his closest friend.“

His son said the last thing Cox told Hollingsworth was a phrase they often exchanged when they closed their conversations – “Hollie, you keep ’em flying, and I’ll keep ’em firing.”

Cox returned to fulfill his promise on October 20, when he stood guard over his buddy’s casket and delivered a tear-jerking eulogy. The touching story is a much-needed palate cleanser in the crazy and uncertain times we’re living in. It’s a stark reminder that there are still patriots out that that love their country and each other.