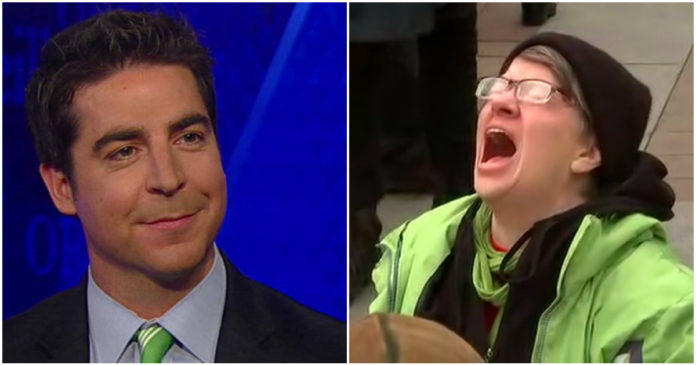 The election of Donald Trump has really inspired the modern day Left to go back to its hippie roots. Activists and angry leftists have been taking to the streets in numbers we haven’t seen since the 1960s, demanding the “evil” Trump be resisted and kicked from office.

It’s been pretty amusing to watch, as these folks often have absolutely no idea what they’re talking about, which is proven when one asks them basic questions about policy and history. One of the brave souls that does that exact thing is Fox News’ Jesse Watters, who loves asking liberals in the streets to explain their views, which usually results in them making fools of themselves. Waters’ latest trip to the left-wing nut-house was at the “Scream at the Sky” event, which was a gathering to lament the one-year anniversary of Trumps’ victory.

As reported at the Hill, while interview protesters at the event, one whack-job screamed in Watters’ face, telling him to “go f***” himself during a man-on-the-street interview taped Wednesday night and shown Thursday.

Watters asked the guy, “Do you feel better?” after he finished screaming at the sky.

“Do you want a pacifier?” Watters followed up sarcastically. “Go f— yourself,” the man replied.

The hilarious piece was recorded for the Fox News’ show “The Five,” which Waters was on to explain what happened at the event.

“Did they know you are from Fox?” asked Dana Perino, a “Five” co-host and former press secretary to President George W. Bush.

“No. I introduced myself,” Watters explained. “Some of them ran in the opposite direction. There were about 30. There were more media [there] than screamers.”

When O’Reilly was still with the network, Watters did a weekly segment of on the street interviews like this, which was always a joy to watch. After Bill’s departure, he was given a one-hour weekly show called “Watters’ World” where he does similar antics that usually make leftists look like fools.

He’s now part of the “The Five” panel of hosts, which will be far more amusing now that he’s on it. It’s amazing what can be revealed simply by showing up to left-wing gatherings and asking them basic questions. Very quickly you realize that these people haven’t thought about their views at any level. Instead, everything is about how they “feel” about something. Feelings trump logic and rational thinking, which is why they desire such destructive policy. But thanks to Trump’s victory, for the time being, all they can do is wail at the sky and gnash their teeth in protest.