Barack Obama, as a lame duck President, has issued notice that he’ll be instituting further legislation that make it more difficult to obtain legal firearms.

Obama, fueled politically by the shooting deaths that the liberal media can’t wait to publish, will meet with former New York Mayor Michael Bloomberg to discuss his new policies, which aim to put a stop to the gun show loopholes, that allow people to obtain firearms without a federal background check.

Not only will this be disastrous to those law abiding citizens that need to purchase a firearm for protection, but it will decimate local economies that count on gun shows as precious revenue. 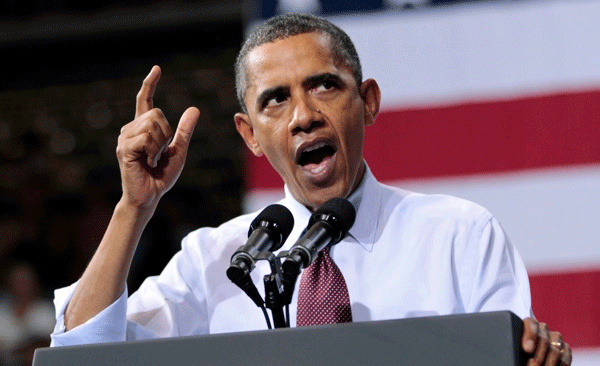 Obama has met with a series of gun control advocates in recent weeks as his aides complete work on a potential order expected to expand background checks on gun sales by closing the so-called “gun show loophole.”

A timeline on the order — which has been tangled in legal and administrative questions — is still unknown. The President met with former U.S. Rep. Gabby Giffords, who was gravely wounded during a 2011 shooting in Tucson, Arizona, on December 4 to discuss gun control.

But even as he works to tighten access to firearms, a new survey shows dwindling support for an outright ban on assault weapons, which both Obama and Bloomberg have advocated as a means to prevent gun deaths.

However, many people are outraged by the prospect of more gun laws preventing them from expressing and practicing what is, and always will be an unalienable right in this country:

As leader of the nation’s largest city, Bloomberg was a vocal advocate for tighter gun laws, launching Mayors Against Illegal Guns in 2006 with then-Boston Mayor Tom Menino.‎

In the aftermath of the 2012 Sandy Hook elementary school massacre in Connecticut, the group morphed into Everytown for Gun Safety, which pushed for new laws in cities and states across the country. Bloomberg poured millions of his own fortune into the group, which helped fund campaigns of pro-gun control candidates.

The organization was meant as a counter to the NRA, whose ratings play a large role in some contests around the country, and whose funding has helped propel pro-gun candidates into office.

Bloomberg’s group had a mixed record in supporting candidates in the 2014 midterm elections, but the former mayor has nonetheless pledged to spend millions backing down-ballot candidates in 2016.

That has earned Bloomberg the scorn of the NRA and other gun control groups, who have painted him as a national poster-child for restricting access to guns.

During Tuesday’s CNN debate in Las Vegas, the NRA debuted a Snapchat filter allowing users to display the words “Hey Bloomberg, don’t NYC my Nevada gun rights” on their photos.

What could Obama do with his executive power?

In his executive action, Obama could alter the government’s definition of who is “in the business” of selling guns, expanding it to include private dealers and others who can currently sell without completing a background check. Democratic Presidential candidate Hillary Clinton has already said she would take such action if elected to the White House.

But the legal hurdles in moving unilaterally have proven difficult for the administration to surmount. If he does move forward with executive actions, they would almost certainly be challenged in court by Republicans and groups like the NRA.

And like previous executive actions, Obama’s move on guns could be overturned by his successor.

Valerie Jarrett, Obama’s senior adviser who also attended the meeting with Bloomberg Wednesday, said this week that the executive orders would be revealed in “short order,” but refused to offer any more detailed timelines.

So, in a nutshell, Obama would make it harder for people to buy and sell guns through private parties, because apparently we’re all criminals and need federal background checks. However, when it comes to Syrian refugees, Obama admits that we can’t check them, but they should come in anyway because they deserve the best. I can’t wait until he’s out of office!