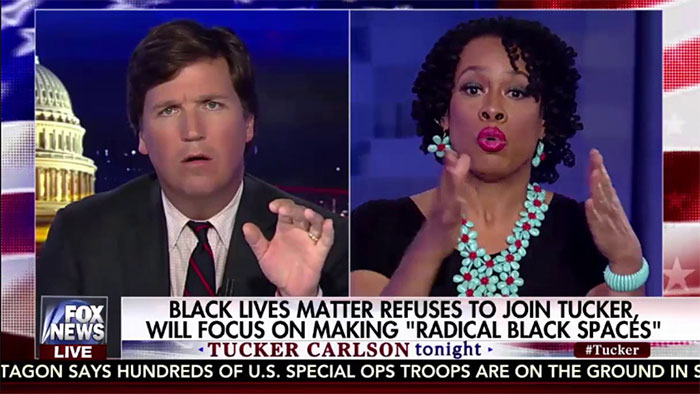 A liberal wackjob who rattled off a bunch of bigoted nonsense during a televised interview has been suspended from her position at a New Jersey College. Sweet justice indeed.

“What I say to that is boo-hoo-hoo, you white people are angry because you couldn’t use your ‘white privilege’ card to get invited to the Black Lives Matter’s all-black Memorial Day celebration! Wow!” Durden shrieked.

That woman, a woman willing to make racist taunts on TV, was recently in charge of educating students. Before her spirited exchange with Carlson went viral, Durden expected to return to Essex County College and teach two speech classes, as well as ones on popular culture and mass communication.

School administrators had other ideas. Jeffrey Lee, the vice president of academic affairs, sent Durden a letter informing her that she was suspended indefinitely.

“THEY DID THIS TO HUMILIATE ME,” THE DISGRACED EDUCATOR COMPLAINED. “ESSEX COUNTY COLLEGE PUBLICLY LYNCHED ME IN FRONT OF MY STUDENTS.”

Racism is the monster under the bed for liberals with her twisted worldview; no amount of evidence will convince them that it isn’t there. Humiliate your college by rambling like a lunatic during an interview? Don’t worry, it’s not your fault if you get suspended. It’s the “system.”

“THERE’S GOT TO BE SOME OTHER AGENDA,” DURDEN’S ATTORNEY, LESLIE FARBER, TOLD REPORTERS. “IT SEEMS TO ME THEY’RE GOING TO MAKE UP SOME REASON. WE’VE GOT TO FIGURE OUT WHAT THAT IS AND WHY. IS SHE TOO OUTSPOKEN?”

Too outspoken. Well, that’s certainly one way to classify an adult woman who screamed: “Stay your asses out! We want to celebrate today. We don’t want anybody going against us today.”