The Trump train rolls on!

Jessie James is not only a man that knows what a good work ethic is, he’s a man who knows Donald Trump. James, owner of West Coast Choppers and reality TV star, participated in a season of the celebrity apprentice, Trump’s famous show having people do business related things in order to gain the top spot.

James made it into the top 3 during his time in New York around Trump. While he was there he noticed things that not only made him an excellent business man and father, but someone who could lead this country back to being great! He went on Facebook to show his support and it’s a great read. 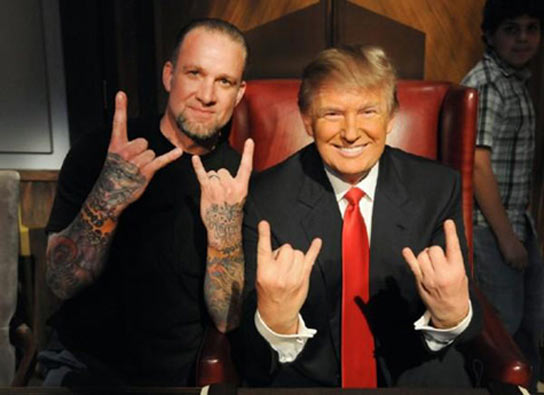 I’ve met a lot of people in life and I have found it best to form opinions about them by actually meeting them in person.
In 2009 I agreed to do that tv show Celebrity Apprentice on NBC. This meant I had to move to NYC for 6 weeks and spend every day with Donald Trump, Ivanka Trump, and Don Jr.

I really had no expectations. I think I was actually the only “Celebrity” that had a semi normal manual labor job. I think this gave me a very different perspective on things. I actually think Donald Trump had no idea who I was or what I actually did for a living.

Over the next month I was able to observe him and his kids in their day to day routine. What I saw was a person that treated everyone with respect. Even the (Hispanic) guys in the mail room. He had coffee from the coffee machine and BS’d with them every single morning. Trash men and cops would stop him on the street and he would stop whatever he was doing and spend a little bit of time with every one of them.

As the month went on I used my work hard work and perseverance to gain respect of the Trumps and most everyone around me.

I made it all the way to the top 3 and when I was let go Donald Trump stood up and shook my hand and said ” Great Job Jesse”.

Now I know that a lot of you will think that is some dumb reality TV show, not real life…and especially Not the presidency. Trust me I know that is very true, but the majority of the Anti-Trumps are basing their opinion of him on sound bites from that very same Reality TV Show.

I think you should look above what the TV Network put out there to boost ratings. Nobody wants to watch somebody be a nice guy, they want to see him say “Your FIRED!”.

What I personally observed is a man that is perfect suited to run this country. He is respectful to the little guy (which shows he worked hard to get where he is) and he is also tough as nails when he needs to be. The people he will appoint to key top positions will be top shelf, and you can bank if they don’t perform? They will get the boot.

Lastly the best quality I observed about Donald Trump is being a dad. This is by far his strongest quality. Ivanka is an super smart, driven woman. The shakes your hand firm and looks you in the eye when she talks to you. Donald Jr. Also has the same smarts and drive, but is also a pretty regular guy that has a “almost” restored 69′ Camaro and loves to long range shoot ( don’t let anyone know I told you that). The poise in these two shows a lot in their parents. I think we are lucky to have his kids as part of the deal.

So before you guys react to what I have written here. One thing you know about me is Good or bad I will always tell it like it is. This guy is the Real Deal, and will Make America Great Again.

Wow! This could put Trump over the top and to the White House!

Do you agree? Let’s hear it in the comments!