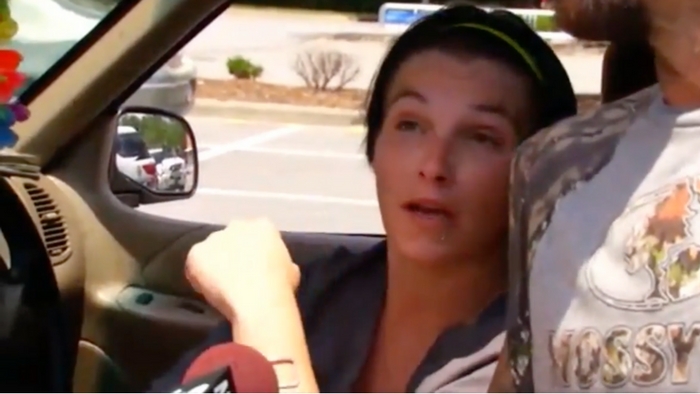 There are a few life lessons that we all should live by. Don’t drink the water in Mexico, don’t let a cowboy make the coffee, and if you value your life, don’t mess with a pregnant lady. If you didn’t learn it before, write it down, because it could cause you physical pain if you don’t.

One North Carolina man found that out the hard way when he messed with the wrong pregnant chick’s purse and wallet. This woman found a petty thief going through her belongings and decided she would not be letting him get away with it. That’s when his day went from bad to worse.

A pregnant North Carolina woman said she saw a man rifling through her SUV in an Asheville Walmart parking lot Wednesday afternoon — and that he took off running with her purse after she confronted him.

Christine Braswell, 26, said she started chasing him on foot but then had a different idea.

“Me being five months pregnant, I chased a little ways then come back, jumped in the car, threw it in gear and come across the curb and ran him over,” she told WLOS-TV. “I was not going to let him get away with it. It’s not right, it’s not fair.”

Raines was transported to a hospital, the station reported, adding that police said he’s expected to be OK and suffered only minor injuries.

Raines is charged with felony breaking and entering, larceny and misdemeanor damage to property, WLOS said, adding that Braswell claimed he broke the screens on her iPad and phone.

And as for Braswell? The station said she’s charged with misdemeanor assault with a deadly weapon.

While what she did may not be strictly legal, since she was no longer in physical danger, I think most of us were probably cheering her on a little. I’m not recommending that anyone do anything like this, however, I think that if Braswell gets a jury trial, she’ll probably get off scot free. Everybody likes a story with a little instant karma in it, and this one is laden with it.

The next time you feel like there is no justice in the world, refer back to this story and remember that if you ever need to find swift and unrelenting justice, just pick on a pregnant lady. Between the hormones and protection instincts, you will get what’s coming to you, even if it’s the bumper of an SUV.