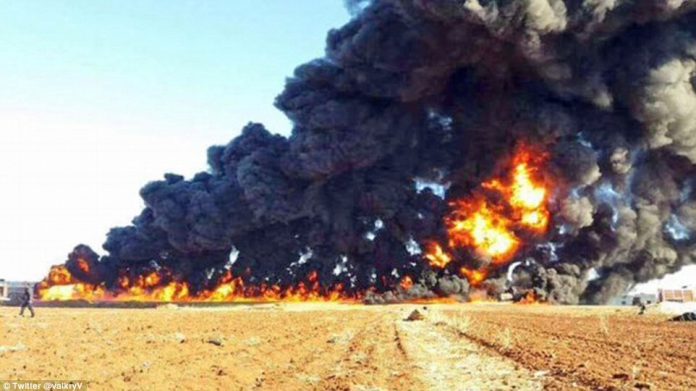 OH YEA! This is some good news finally. Even as President Obama continues to stymie military operations in the fight against ISIS, our men and woman are still risking their asses to get ISIS beaten once and for all. For all the air strikes Obama has called off, when they do get the nod, they make it count.

Today we are PROUD to tell you that the single greatest attack on ISIS has been done by a U.S. airstrike! That’s right, our soldiers identified and wiped out 250 ISIS soldiers in a convoy outside of Fallujah late Wednesday.

Here’s everything we know.

A series of American airstrikes killed at least 250 ISIS fighters driving in a convoy outside Fallujah on Wednesday, a senior U.S. defense official confirmed to Fox News.

The strikes occurred on the outskirts of the Iraqi city in “southern Fallujah,” a second U.S. defense official told Fox News.

“There was a strike on a convoy of ISIS fighters trying to leave a neighborhood on the outskirts of southern Fallujah that we struck,” the official said.

At least 40 vehicles were destroyed in the airstrikes, a U.S. official told Reuters, which was first to report the air assault.

The U.S. airstrikes come roughly 24 hours after the triple suicide bombing at Istanbul’s Ataturk Airport that killed at least 42 people where ISIS is considered the prime suspect, according to top U.S. officials.

OOO RAH! HELL YES! This is some great news in the fight against the #1 threat to the American way of life: radical Islamic terrorism.

“If anybody here believes the U.S. homeland is hermetically sealed and that ISIL would not consider that, I would guard against it,” Brennan said, using another acronym for the group.

Earlier this month, Brennan told Congress that the U.S. battle against the Islamic State has not yet curbed the group’s global reach and that they are expected to plot more attacks on the West and incite violence by lone wolves.

He said ISIS has a large cadre of Western fighters who could potentially act as operatives for attacks in the West.

Hear this as well: if we don’t work together to take out ISIS, more people will die and it’ll be your hands their blood is on.