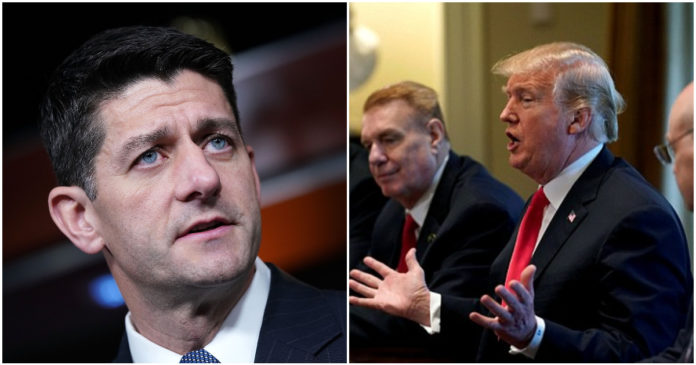 As if Congress wasn’t already giving President Trump enough trouble, his latest plan to protect American products from the Chinese and other major exporters has come under severe scrutiny from his fellow Republicans.

Trump has decided to impose new tariffs on foreign steel and aluminum in a bid to protect American businesses from foreign entities. While there are plenty of legitimate arguments for and against the policy, those against it aren’t providing any ideas of their own, and are instead just afraid of angering China and starting a trade war with the exporting giant. Among those wringing their hands is Speaker of the House Paul Ryan.

As reported at the Daily Mail, on Monday, Ryan issued his harshest rebuke yet of Trump’s tariff plan, saying that he’s “extremely worried” about the larger economic effects the plan would have.

“We are extremely worried about the consequences of a trade war and are urging the White House to not advance with this plan,” Ryan spokeswoman Ashlee Strong said in a statement.

“The new tax reform law has boosted the economy and we certainly don’t want to jeopardize those gains,” he added.

A GOP source in Congress claims that party leaders aren’t ruling out future action on the issue, but what their plan looks like is still a mystery.

When asked about Republican opposition to his tariff plan, and if his lack of support would cause him to back off or reevaluate, the president was defiant.

“No, we’re not backing down,” Trump said. But he also linked the tariff issue to ongoing NAFTA talks, introducing a possible way out.

“We are renegotiating NAFTA, as I said I would. And if we don’t make a deal I’ll terminate NAFTA.”

The president also responded to the hand-wringing folks are doing about increased tariffs and how they could spark a trade war.

Trump has said his intention is to help American steel and aluminum manufacturers, but the result could be increases in production costs for companies that use imported metals to make food and beverage cans, pickup trucks, appliance, and many other products.

The Wall Street Journal editorial page has called Trump’s plan “the biggest policy blunder of his Presidency” and called the tariff a “tax increase.”

“This tax increase will punish American workers, invite retaliation that will harm U.S. exports, divide his political coalition at home, anger allies abroad, and undermine his tax and regulatory reforms,” the paper wrote – pointing to the nearly 2 percent drop in the Dow Jones Industrial Average on word of the “self-inflicted folly,” pointing to a metric Trump closely follows.

Again, concerns of higher prices aren’t unfounded, among many other potential effects. However, it’s amusing to watch Republicans wring their hands over this and talk about “doing something” about it in the future when they’ve been consistently kicking the can down the road for years. They’ve done nothing to protect American manufacturing in any shape or form, especially the steel industry, as the Chinese have flooded the market with cheap steel in an effort to drive people out of business.

It’s always “in the future” when it comes to the GOP, they never want to tackle difficult and pressing issues if they can kick the can down the road. But this time, even if they have valid arguments, the president might just pull the trigger on his own.