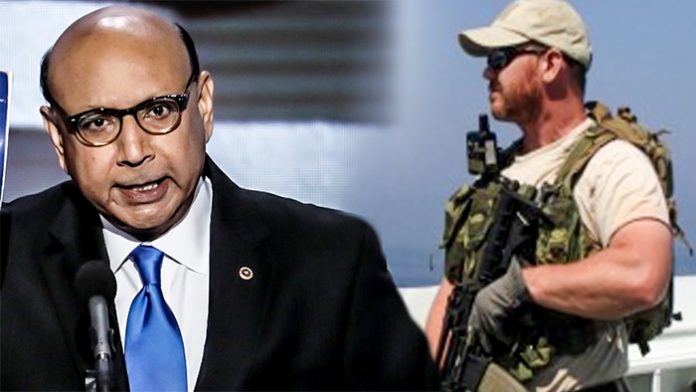 During the DNC last week, you may have seen a Muslim man named Khizr Khan speak about Muslims in America. He spoke of his son, a US Marine who was killed on active duty. Khan said that he, Khizr Khan, and not his son, had sacrificed so much for our country.

There is one thing horribly wrong with that sentiment. As a father, he is free to greive for his son. Any man on earth that loses his son to war feels that way, that is a normal human emotional response. But Khizr saying that he sacrificed is completely wrong, and a current US Marine has written an open letter to him stating exactly why his speech was disturbing and manipulative in the highest regard.

Here is the marine’s awesome letter in it’s entirety.

I want to preface this letter by stating that I respect your son’s sacrifice for this great nation.  By all accounts, he is a true hero that sacrificed himself in service to our country. For that I am thankful.

As a veteran, I watched your comments at the Democratic National Convention with a mixture of sadness, and anger.  The United States has a military comprised of volunteers.  Every single member has made the conscious choice to join the military and serve.  There is not a single service member who has been forced into service.  It is important for all service members (and apparently, their families) to understand that service to this great nation does not imbue one with special privileges or rights.

I found your comments troubling when you said: “Have you ever been to Arlington cemetery? Go look at the graves of brave patriots who died defending the United States of America. You will see all faiths, genders and ethnicities. You have sacrificed nothing and no one.”

Does it matter whether Mr. Trump has sacrificed “…nothing and no one?”…has Ms. Clinton “..sacrificed” for this nation?  How about Mr. Obama?   Your comment stating that Mr. Trump “…has sacrifice no one” is alarming.  Are you intimating that YOU sacrificed?  Sir, your son willingly sacrificed himself.   As a father I cannot imagine the pain you must feel but his sacrifice is his own.  He was not forced to serve.

I am troubled that you would allow a party that has little more than contempt for the US Service Member to parade you into the DNC to denounce Donald Trump.  Did you watch when protesters at the DNC booed and heckled Medal of Honor recipient  Capt. Florent Groberg?

Did you notice your party interrupting the moment of silence for slain police officers?  Your own hypocrisy in not denouncing these acts and instead using the DNC as a platform to make a political point is disgraceful.  The simple fact is that whether one served or sacrificed does not give greater power to their statements.

One vote is as valuable as another.  That sir, is why our Country is great.  Your condemnation of one person for a statement while standing idly as your party disparages veterans and police officers is the height of hypocrisy.

To conflate the need to prevent potential terrorists from entering our country with the belief that ‘all Muslims’ should be banned is simply wrong and disingenuous. As a reminder, Mr. Trump said: ” “Until we are able to determine and understand this problem and the dangerous threat it poses, our country cannot be the victims of horrendous attacks by people that believe only in Jihad, and have no sense of reason or respect for human life,” The irony of your son’s own death at the hands of these very people in Iraq should not be ignored.

I have little doubt that your son would have recognized the need to protect our country from these very people.  In fact, he held is own troops back so that he could check on a suspicious car.  Your son understood sacrifice and how to protect “his people”…’his soldiers’….’his fellow Americans’…

As you continue to make the media circuit and bask in the glow of affection cast upon you by a party that has little regard for your son’s own sacrifice, and veterans in general, I would ask you to consider your comments and your position more closely.

US Marine and Navy Veteran.

Share this everywhere! We need to get this word out to show the world that this is how the Democrats operate, through manipulation and forced emotional response. We salute you Mr. Mark. You are a true patriot and a gift for our country to have.