Here’s the difference between Obama and his weak administration, and Vladimir Putin and his iron fisted, bombing of ISIS administration.

Obama had to go through mountains of liberal BS to even get approval for air strikes in Syria. Putin said, “We’re doing it,” the government agreed, and in 2 days they were bombing the crap out of the region.

And it also seems that Russian weather broadcasts are better than ours as well, taking the liberal nature right out the window. 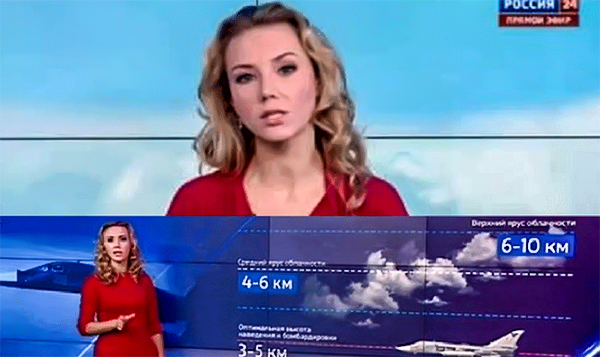 The forecaster gave a cheery analysis of the perfect conditions for bombing, while standing in front of an image of a bomber and the headline ‘Flying weather.’

Light cloud cover ‘will not make flying more difficult and will not influence the systems for aiming weapons,’ she told viewers on Saturday, AFP reported.

‘Experts note the time for the start of the air operation (in Syria) is chosen very well,’ the forecaster said, flicking between weather charts and defense ministry footage of strikes.

Now that’s what I call awesome! Obama and the liberals should take a few notes.