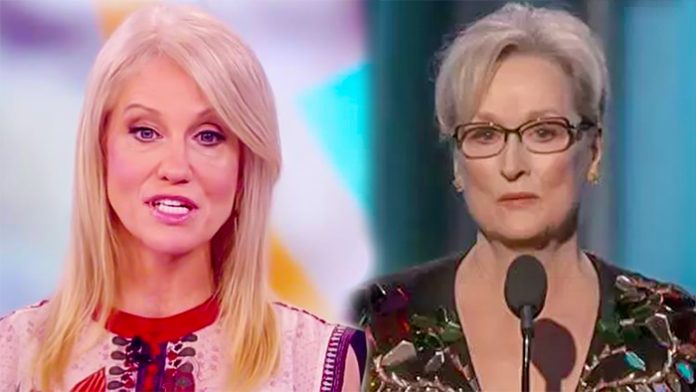 Kellyanne Conway is one hell of a woman and an incredible campaign manager. When she speaks, the world listens because she doles out truth bombs better than anyone in politics right now. And when Meryl Streep went on an anti-Trump temper tantrum last night, Kellyanne responded. It’s brutal.

For those of you that missed it, Meryl Streep received the Cecil B. Demille award for lifetime achievement in acting. Instead of graciously accepting the award and thanking all of those along the way that helped her becoming one of the best-known actresses in modern times, she decided to throw that all away on a politically charged speech which resonated only with those in the room and the delusional liberal brats that can’t handle a Republican president.

But what Streep didn’t expect was the catastrophic backlash that came this morning. Kellyanne Conway was the one leading the charge with a SCATHING remark to Streep.

I mean, isn’t that how the liberals and Hollywood operate always? They do nothing but become offended, especially on such a non-story as Trump and that reporter (which was taken completely out of context), and then utilize that to preach and talk down to normal Americans like it is their moral duty.

Conway is 100% spot on here. Streep should come forward and talk about the mentally challenged boy who was kidnapped, assaulted, and tortured by liberal, BLM inspired thugs. Where are her comments on that?

Everyone, do yourselves a favor, there is no doubt in my mind that this story will be praise and published everywhere on the liberal side today. Let’s share THIS article everywhere and show them that the other side of that story is the one that exposes the truth to their grandstanding.

It means absolutely nothing.