Donald Trump has a knack for doing what others have never thought possible. First, he’s an ultra successful businessman, devoted family man, and outspoken political figure on all the issues that matter.

That’s why yesterday at his town hall rally in Vermont, Bernie Sanders’ home turf, liberals weren’t expecting a huge turnout. As it happened, they oversold the 2,000 seat theater by a factor of ten. That’s right, 20,000 people showed up to support Trump in one of the most liberals states in America – the state that spawned Bernie “free everything” Sanders.

According to the NY Times,

The choice of venue seemed curious to some, but Thursday’s rally served multiple purposes for the Trump campaign: needling Mr. Sanders in his own neighborhood; garnering attention in nearby New Hampshire, which holds the nation’s first primary next month; and showing that the candidate can attract big crowds in a Democratic haven.

“They’re afraid to come up here because it has a tendency to be a little bit liberal, a little bit rough,” Mr. Trump said of his Republican rivals. “When you look at the candidates, I’m like the only one.”

A circuslike atmosphere greeted Mr. Trump as many more people tried to get into the event than the Flynn Center for Performing Arts could hold. A brass band played as demonstrators protested outside, and many waited hours to get into the rally, with organizers turning away activists who said they supported Mr. Sanders.

While much of Mr. Trump’s ire during the campaign has been directed at Hillary and Bill Clinton and Senator Ted Cruz as the voting nears, he has not hesitated to show his disdain for the policies of Mr. Sanders, whose socialist views he frequently derides. Thursday night was no different, as he accused Mr. Sanders of wanting to raise taxes sharply and called him a weakling for allowing Black Lives Matter activists to commandeer one of his rallies last year.

“Oh, I would love to run against Bernie,” Mr. Trump said to cheers. “That would be a dream come true.”

Trump supporters also did well to convert Bernie supporters to the truth, 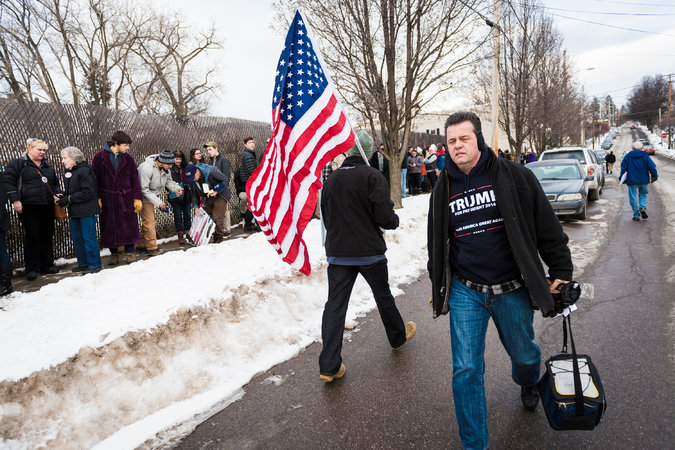 In recent weeks, backers of Mr. Trump have even started a “ditch and switch” movement, urging Democrats and independents to join the Republican Party so that they can vote for Mr. Trump in primary elections.

On Thursday, many who waited to hear Mr. Trump speak said they thought he and Mr. Sanders have some things in common even though they sit on opposite ends of the political spectrum.

“I think he’s smart, and he has the best chance of winning support and maybe flipping the state,” Daniel Nadeau, 22, of St. Albans, Vt., said of Mr. Trump.