Trump is in the driver’s seat, no matter what Jeb Bush is doing.

Jeb Bush may be “surging” in the NH polls, but we all know that’s inflated from the special interests groups that are deep in his pockets. Trump still holds a gigantic lead and Trump Trainers are singing the praises of the new poll released just before tomorrow’s Primaries. 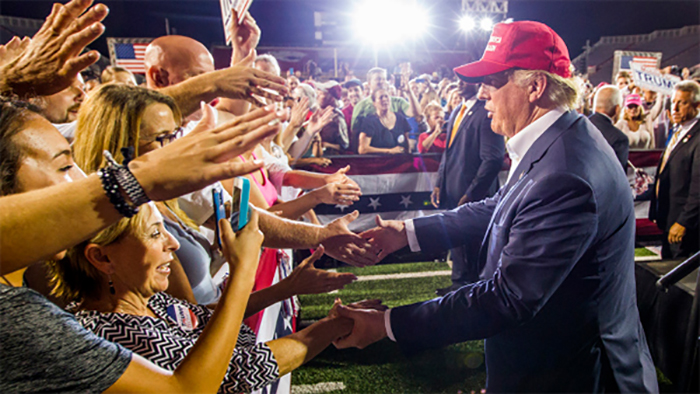 The poll, however, shows a very tight race for second place, with Jeb Bush surging 9 points since Monmouth’s last survey in January.

Sen. Marco Rubio (R-FL) has 13 percent support, up just one point in the last month. Sen. Ted Cruz (R-TX) has 12 percent, down just two points since the beginning of the year.

But we all know it’s a race for second since Trump has first all but sewn up.

Considering the poll’s 4.4 percent margin of error, New Hampshire currently has a four-way race for second. Kasich, Rubio, Bush and Cruz are all well positioned to finish runner up in Tuesday’s primary. Chris Christie is much further back with just 6 percent support, down slightly since January.

All the pundit talk about Marco Rubio having momentum going into Tuesday’s vote looks hollow against this poll. Rubio’s support level in the state is unchanged since November. The only significant change in New Hampshire since the Fall is growing support for both Bush and Ted Cruz and a collapse in support for Ben Carson.

We’ll see how this all plays out tomorrow. If you were a caucus voter, who would YOU vote for? Let’s hear it in the comments below!