Liberal Hollywood has been up Obama’s butt and in his pockets ever since he was elected back in 2008. It finally seems they’ve had enough.

Angelina Jolie is as famous as anyone in the world comes. She has been trumpeting Obama and his policies all over the world as she visits under privileged countries and does humanitarian work. Well it seems she’s grown tired of his BS, a tone that’s being echoed all across the liberal community and permitting into Hollywood.

Check out what she had to say during a recent speech. This is epic! 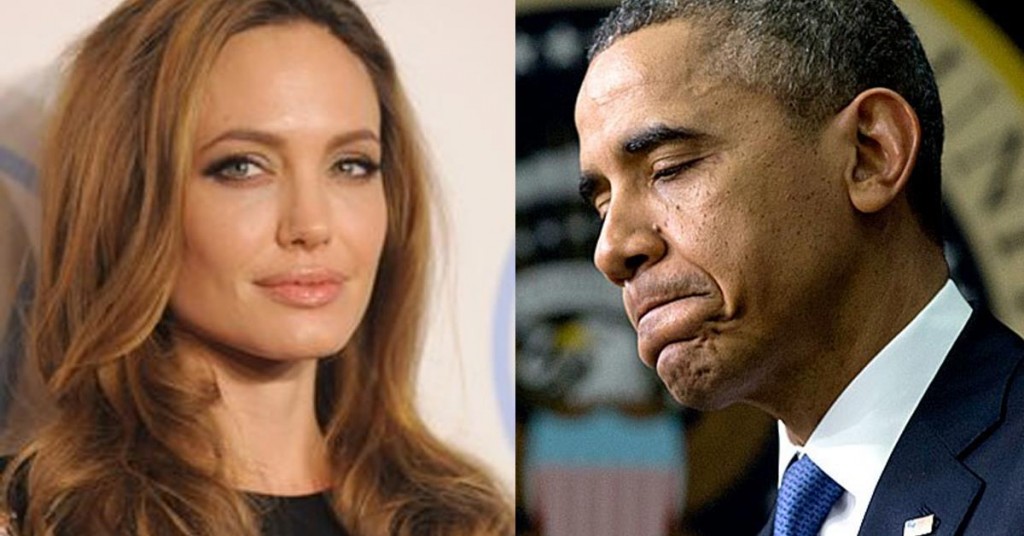 During an appearance before the U.K.’s House of Lords on Tuesday, Hollywood actress and human rights advocate Angelina Jolie spoke out about how Islamic State group militants use sexual violence as a means to perpetuate terrorism — and about how we need strong leadership (unlike that of President Barack Obama) to overcome this threat.

“They are dictating it as policy beyond what we have seen before,” Jolie said. “They are saying, ‘We should do this, this is the right way to build a society, so we tell you to rape.’”

Islamic militants are basically building a civilization not focused on growing food or educating children, but rather on kidnapping, enslaving and raping women, to perpetuate the endless cycle of terrorism, and Obama has allowed these barbaric radical Muslims to thrive.

“The most aggressive terrorist group in the world today knows what we know, knows that it is a very effective weapon and they are using it as a centrepoint of their terror and their way of destroying communities and families, and attacking and dehumanising,” Jolie explained.

“For over 10 years, I had been visiting the field and meeting families and survivors of sexual violence who felt for so long that their voices simply didn’t mater, they weren’t heard, and they carried a great shame,” Jolie continued.

She added that we need “a very, very strong response at this time” to stop this horrific behavior. Of course, we have been calling on Obama to make that strong response for years, but he’s far more interested in race baiting back home than dealing a death blow to radical Islam.

Incredible! Obama could finally be taken down with all his cronies turning on him once and for all!