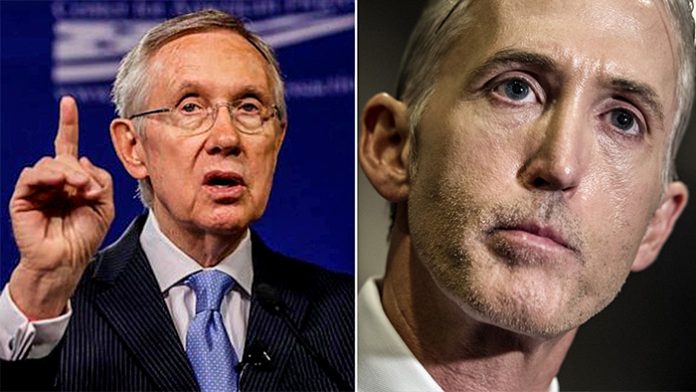 In case you haven’t heard, the FBI has reopened the email case that might put Hilary Clinton behind bars. When that news broke, Senate minority leader Harry Reid immediately went after James Comey, director of the FBI, though it make not be what you think.

Reid is a Democrat so going when he went after Comey, one would think that he’d be going after him about the emails right? Wrong. Reid said that Comey has “explosive evidence” about Trump’s ties to Russia. You can’t make this up people.

Here’s the passive problem with that. Reid magically uses another, far more serious allegation about Hillary Clinton to then deflect and turn it on Trump with what it nothing more than speculation? This is the liberal mind at work folks.

“In my communications with you and other top officials in the national security community, it  has become clear that you possess explosive information about close ties and coordination between Donald Trump, his top advisors, and the Russian government – a foreign interest openly hostile to the United States, which Trump praises at every opportunity,” he said. “I wrote to you months ago calling for this information to be released to the public…and yet, you continue to resist calls to inform the public of this critical information.”

“Your rushed to take this step eleven days before a presidential election, despite the fact that for all you know, the information you possess could be entirely duplicative of the information you already examined which exonerated Secretary Clinton,” he said.

So who comes to the rescue to say that Harry Reid is a giant moron? None other than our favorite man in office, Trey Gowdy. This one is going to sting.

When Trump gets in to office, Gowdy needs a spot in the cabinet.