There have been many stories the liberal media has been showing you in the past 4-5 months that are sensationalistic, and don’t get to the truth. Maybe none more polarizing than the Ferguson, Missouri police scandal and killing of an unarmed black man. This of course started the Black Lives Matter campaign and viral hashtag.

Yet the movement is going in the wrong direction and is sending the wrong message. None are more aware of this than the officers that keep us safe on a daily basis, as many forget that their lives are in jeopardy as well. The Boston police union took a stand on Labor Day this past Monday, to all those who don’t support these brave officers, especially president Obama. 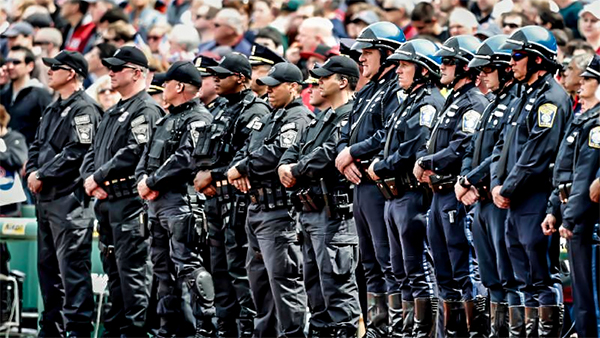 The White House is reportedly very upset after the Boston Police Union chose to boycott President Obama’s Labor Day address in their city.

The association’s executive director, Jerry Flynn, explained the officers’ reasons why to the Boston Herald:

Our members are enraged at his lack of support of law enforcement. It’s clear that he has an agenda, and unfortunately the police are not part of his agenda.

Let’s face it, [there have been] eight people killed in a nine-day period, eight police officers, and his silence up until recently has been deafening. And the real sad part of this — and when I went to the White House in the first term with Joe Biden — he said to me that he would be the voice of law enforcement. Well, as much as I love and adore Joe, his voice has been silent as well. So it’s not an Obama problem. It’s an administration problem.

This is a horror show. This is an epidemic of lawless people trying to kill police officers for no apparent reasons. Case in point is the lieutenant who was pumping gas in Houston. Over 7,000 people were at that church, and where was he [Obama]? Why wasn’t he there instead of a unity breakfast?

The president, in fact, was still inferring that Ferguson was an example of racism by Officer Darren Wilson in March, despite his own Justice Department issuing a report that same week disproving the “Hands Up, Don’t Shoot” narrative. Flynn argued that the president’s actions, or lack thereof, have actually inflamed false anger towards police officers as manifested by movements like Black Lives Matter.

Flynn went on to extend an olive branch, but not without thorns.

He’s got a new attorney general. What’s her agenda? What is her message going to be, that she’s actually putting forth? I don’t know the answer to that question. But certainly, what he’s doing now, what he hasn’t done now, has been supportive of those in law enforcement.

This of course made the White House furious, but you know what? You get what you ask for. If you don’t support those that protect the innocent civilians from the thugs of this country, they this is the response you’ll get. I’m not sure why the liberals are surprised by this.