If it was a liberal doing this, I wouldn’t be shocked, but apparently dishonesty knows no political party. Ted Cruz may have won the Iowa caucus, but he didn’t get there fair and square.

Apparently, he made a big effort in telling everyone that Ben Carson was pulling out of the race, which wasn’t even close to being true as Carson had some sizable support himself.

Dr. Ben Carson and his campaign accused Sen. Ted Cruz’s team of foul play on Monday night, alleging that his supporters had convinced caucus-goers he was out of the race.

“I was reasonably happy today, until I, you know, discovered the dirty tricks going on — spreading rumors I had dropped out,” Carson said on Monday night. The campaign told MSNBC they’d had “confirmed reports” of Cruz supporters telling voters at caucus sites that Carson had dropped out of the race. MSNBC has not yet confirmed the authenticity of these reports. 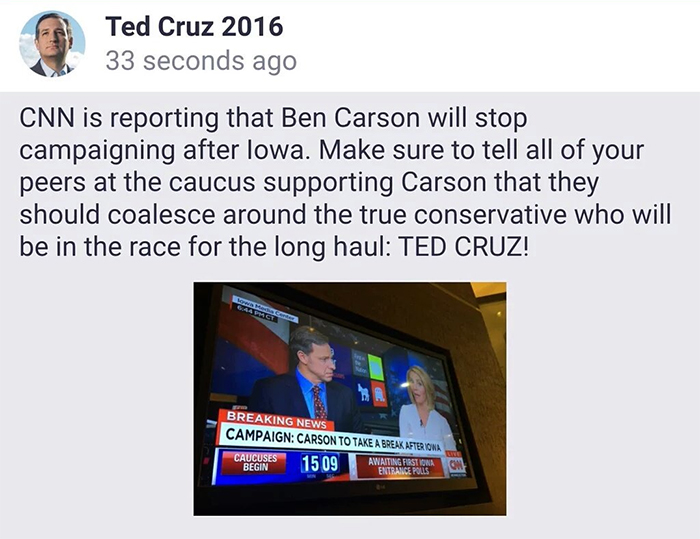 “That’s the reason I got into this race, looking at the level of deceit and distrust going on in country,” Carson told supporters.

The campaign is pointing to a tweet from Rep. Steve King, who endorsed Cruz, as evidence. The tweet was sent at 8:20pm EST, when Iowans were already at caucus sites.

Carson looks like he is out. Iowans need to know before they vote. Most will go to Cruz, I hope. https://t.co/lW5Js50EMA

Carson’s campaign rushed to downplay the importance of a trip home.

“Dr. Ben Carson is not suspending his presidential campaign, which is stronger than ever,” a statement sent out to reporters read. “After spending 18 consecutive days on the campaign trail, Dr. Carson needs to go home and get a fresh set of clothes.”

While Carson isn’t a front-runner like he once was, this would have put Donald Trump clearly over the top in Iowa. Ted Cruz, shame on you. While it’s a despicable thing to do, it shows Cruz’ character, and it can’t be done again, so we will have to wait until the next primary to make sense of it all.