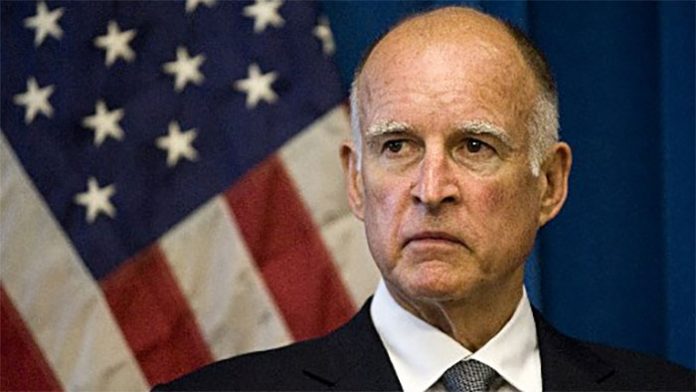 Well, well, well. The liberal politician who has constantly blasted President Donald Trump throughout the entire election cycle is now, all of a sudden, asking him for federal help.

California Governor Jerry Brown has shown his disgust for President Trump on many occasions with pledges to fight and resist Trump’s policies at all costs. In an interview before the election, he said exactly that:

“IF TRUMP WERE EVER ELECTED, WE’D HAVE TO BUILD A WALL AROUND CALIFORNIA TO DEFEND OURSELVES FROM THE REST OF THE COUNTRY.”

However, Gov. Brown is now asking the Trump administration for federal assistance in response to a failure of a spillway at Lake Oroville. So far, 200,000 people have evacuated the surrounding area around the dam.

Here’s footage of the disaster:

Brown said in this letter that aid is needed to assist the 188,000 residents of Butte,S utter and Yuba counties who were ordered to evacuate Sunday after concerns an emergency spillway could give way, unleashing a gush of water to downstream towns.

California’s U.S. senators — Dianne Feinstein and Kamala Harris – also called on Trump, asking him to approve a disaster declaration for the state in response to damage from recent storms. Feinstein and Harris are also asking the president to provide $162.3 million in disaster assistance that California requested.

President Trump will almost certainly provide aide if it is needed in the state as it is the right thing to do but Californians should be careful about viciously attacking the President and then turning around and asking for a handout.

The only comment made by the administration in relation to this disaster was by a senior official within the white house who said that California and Washington will work “in a constructive way” to repair the failing infrastructure in the state.