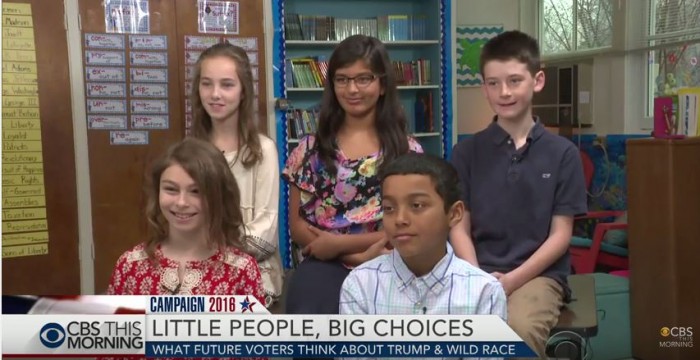 CBS morning show “CBS This Morning” has gone a bit too far with this one. They had a few young people on to talk about the world and politics on the whole. A very pressing topic of course for 5th graders who are going through probably the most awkward period of their lives. the kids have been holding debates, though, in their schools about the election and everything happening in the country.

Watch below as these kids are led into giving answers that directly bash Trump.

The questions led directly down a path to bash Trump and elevate Muslims.

Reid explained that these children have been holding mock debates of their own at their Virginia charter school, but suggested that they are being way more civil about it than the adults they’ve seen on TV. But instead of asking them how their debates are going, the segment quickly turned against Trump.

Are you tired of them being mean to each other?

Are you tired of them talking over each other?

Are you tired of them making fun of each other?

The answers from the children to each were a resounding, “Yes.” This led him to ask who they believe started it all.

“Donald Trump,” they said, as Reid laughed along in approval.

Notice how the segment is edited in a way where it’s not capturing everything the kids are saying. One girl even said that she agree with Trump, but they still let her down the path of saying Trump caused this mess. It’s also sickening that the Liberal media is stooping this low to bash Donald Trump. Why don’t they do it themselves? Shameful.