Vladimir Putin is on the war path, and I don’t think anyone can fault him for that. Not only is he staging a full scale bombing of ISIS in Syria, propping up the regime that kept them in their place, but he has to deal with the public relations nightmare that is the commercial airliner that was downed by the same terrorists that he’s fighting, as a direct response to his country’s actions.

Well, as a charismatic and strong leader, he doesn’t back down just because he’s threatened. He’s also following in the words of Donald Trump, who would “bomb the **** out of ISIS” the first chance he gets. 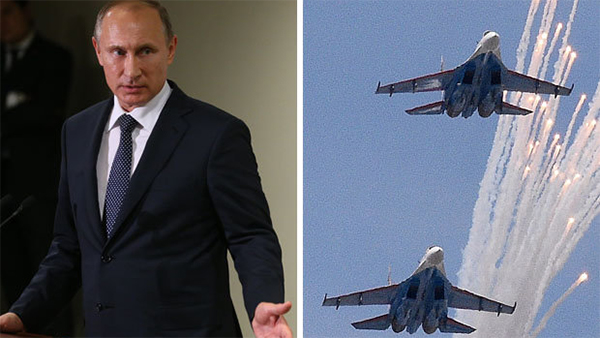 According to NY Times,

Hours after confirming for the first time on Tuesday that a bomb brought down a Russian charter jet over the Sinai Peninsula in Egypt more than two weeks ago, killing all 224 people aboard, Russia joined France in bombing Islamic State targets in Syria.

For a second straight day French warplanes hit a command post and a recruitment center for jihadists in an Islamic State stronghold, Raqqa, the French Ministry of Defense announced on its website, while Russian news reports said a Russian submarine had fired cruise missiles at Islamic State targets in the same area.

There were also news agency reports of Russian fighter-bombers hitting Islamic State targets in Syria, but those could not be confirmed.

They’re making a lot of head way in that region, and I can’t wait until ISIS is eliminated and is but a footnote in history. We’ll all be better for it.