The Trump train has no signs of slowing down!

After he promised to ban Muslims until the government figured out “what the hell is going on”, liberals became outraged and called him every name in the book.

However, real Americans like you and I, that understand that we can’t protect ourselves with our hands tied behind our backs, knew that this was the exact move we need to move this country forward. 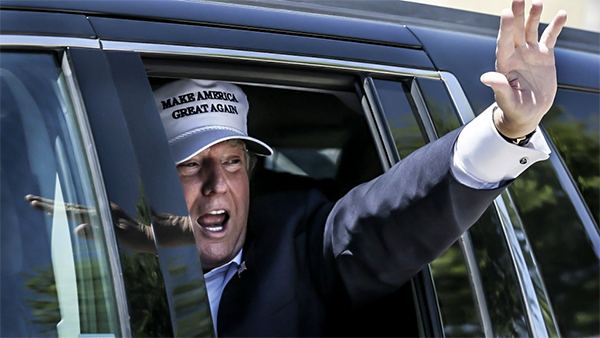 According to the results of the latest Monmouth University poll surveying voters identifying as Republican or independents leaning toward the GOP, Trump earned 41 percent, nearly tripling the support of his closest rival, Texas Sen. Ted Cruz, who took 14 percent.

The poll underscores Trump’s success at keeping voters fixated on his unprecedented presidential campaign. The latest national survey was taken after Trump landed another whopper, proposing in an emailed statement last Monday to temporarily ban all Muslims from entering the U.S. The statement gave Trump another boost of media attention, and some speculated it was designed to shift the conversation away from a Monmouth poll from Iowa released earlier that day that showed Cruz with a 5-point edge in the state.

Trump celebrated the favorable findings with a series of tweets and a post on Facebook, featuring a graphic, that was shortly taken down after posting, without explanation.

“Looks like we just broke another polling ceiling,” he wrote to his followers. “While the establishment schemes to nominate someone they control – the voters are clearly indicating that they want someone who will fix the broken political system in DC. Thank you for your support! We will ‪#‎MakeAmericaGreatAgain‬!”

Among various demographic groups, Trump picked up 13 points among those with a high-school education, earning 54 percent support with that group, and 11 points with those identifying with the tea party, earning 52 percent with that group. Cruz, however, picked up 15 points among tea party supporters, receiving 29 percent with that group. Trump’s standing among women has fallen slightly, down four points since October (41 percent to 37 percent this time), though he has gained three points with men (41 percent to 44 percent). Among those with a college degree, support for Trump fell by 10 points, from 41 percent to 31 percent.