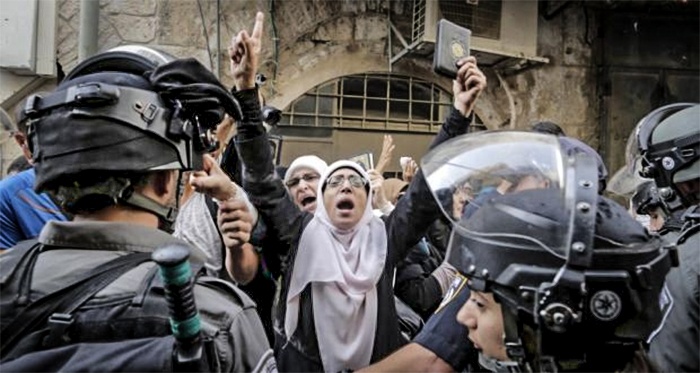 When liberals say that Islam is a “religion of peace”, what they really mean is that they’re willing to overlook the massive amounts of human rights violations that the religion has brought forth upon humanity.

Time and time again, we see overreactions and violence from the group that everyone says is “persecuted” and “marginalized”, despite being the fastest growing religion on the planet, and having the culture that wants desperately to bring the clock back to when women were considered property and you could be beheaded for having different views.

That’s the subject of this video – the overreaction of Muslims when it comes to something innocuous. In Israel during passover, the holiday held most sacred to people of the Jewish faith, about a dozen jews descended on a site called the Temple mount and started praying. As soon as Muslims saw this, they attacked with ferocity because instead of allowing everyone to come to God in their own way, they have to crush their opponents into submission.

Video footage from Arab television emerged on Tuesday showing Muslim worshipers on the Temple Mount attack a small group of Jews who ascended to the holy site and attempted to pray.

Israeli authorities on Tuesday evicted eight Jewish visitors from the Temple Mount complex in response to what security forces said was inappropriate behavior at the holy site.

Police said 527 visitors, of them 400 tourists, ascended to the holy site during Tuesday morning visits.

After the last group of Jewish visitors left the compound, a gathering of Muslim worshipers began yelling slogans at the Jews.

Police and Border Police officers in the area escorted the group of Jews away from the scene and acted to subdue the disturbances.

As Israeli Jews celebrate Passover, the security services are on high alert as part of an effort to head off any attempts by religious Jews to make overt gestures on Temple Mount that might be construed as worship.

Jews are not permitted to pray at the site, as doing so would offend Islamic religious sensibilities. This arrangement was agreed upon by the Israeli authorities and the Wakf – the Islamic trust that oversees the day-to-day operations of the Muslim shrines atop Temple Mount – following Israel’s conquest of east Jerusalem in the 1967 Six-Day War.

One day after 13 Jews were removed from Jerusalem’s Temple Mount for illegally praying at the contested holy site, the Jordanian government on Monday warned Israel of “serious consequences” if the area’s delicate status quo is breached.

Sunday morning’s impasse was further exacerbated when a group of Muslims was also removed from the compound by police for chanting “Allahu Akbar” (“God is great”) at the nearly 1,000 Jewish and Christian visitors who ascended it for the holiday.

Does this sound familiar? It sounds like every time a Muslim wants his way, he cries foul and hides behind international law, however when they feel obligated to kill in the name of Allah and talk about the evils of Western Civilization (the very same civilization that allows them to live as peacefully as they are now), they completely throw that law by the wayside. This is simply insanity.