I guess someone didn’t keep their mouth shut. No matter! We are all abuzz with this news and glad the beans have been spilled.

Ben Carson, a former GOP candidate and firm Trump supporter, just did an interview with the Washington Post and inadvertently told the interviewing reporter who Trump has on his short list for VPs. As we analyzed the list, there were some surprises and some that weren’t.

But the person at the top? Whoa. 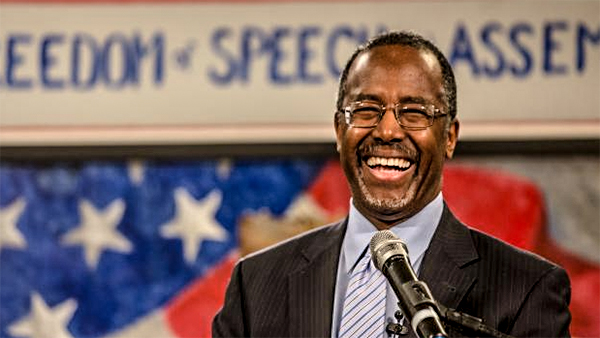 Ben Carson inadvertently revealed who was on Donald Trump’s list of possible running mates on Sunday in an interview with The Washington Post.

A Post reporter told the retired neurosurgeon that a new Morning Consult poll found that he was the most favorably regarded among a lengthy list of potential options. Carson, who mounted a failed bid for this year’s Republican presidential nomination before dropping out and declaring his support for Trump, then asked who else was on the list.

“Those are all people on our list,” Carson responded.

His wife, Candy Carson, then cut in and said, “Well, not you,” implying that Carson was not being considered.

Carson attempted to clarify his comments after the story ran, telling The Post that he would “say yes to everybody” as a potential Trump running mate. The surrogate is part of a committee to pin down a running mate for Trump.

“When it comes to who could be the vice president and you name a list of people, I’m going to say yes to everybody,” he said. “Everybody could potentially be considered — doesn’t mean they are on the short list.”

Christie, Palin, Kasich, and Rubio have all addressed the vice-presidential chatter in recent days.

Thanks for the hot tip Ben! What does Trump think about all of this?

Trump told the Associated Press on Tuesday that his short list for a running mate was down to five or six contenders, and he acknowledged that Christie was on that list. Christie later responded that being on a short list “doesn’t mean a whole heck of a lot.”

Palin was asked about the possibility by CNN’s Jake Tapper last week. She said she didn’t know whether being Trump’s running mate would help the presumptive GOP nominee.

“I want to help and not hurt, and I am such a realist that I realize there are a whole lot of people out there who would say, ‘Anybody but Palin,'” she said. “I wouldn’t want to be a burden on the ticket, and I realize in many, many eyes, I would be that burden.”

“So, you know, I just — I just want the guy to win,” she continued. “I want America to win. And I don’t know if I would be the person that would be able to help him win, Jake.”

Kasich shot down the idea, saying there was “zero chance” he would be Trump’s running mate, while Rubio told CNN that the real-estate mogul would be better served by someone who agreed with him “on his issues.”

As for Cruz, he hasn’t warmed to Trump since dropping out of the presidential race after a big loss in the Indiana primary earlier on May 3.

“We may face some challenging days ahead,” Cruz said during a speech at the Texas GOP Convention in Dallas on Saturday afternoon. “But I am convinced [the conservative] movement — the men and women gathered here — will be the remnant, will be the core of pulling this country back from the abyss.”

We don’t want Cruz on the ballot, but a Trump/Carson ticket sounds pretty appealing to us. We’ve been saying that since late last year. What do you think? Who would make Trump’s best VP? Let’s hear it in the comments!