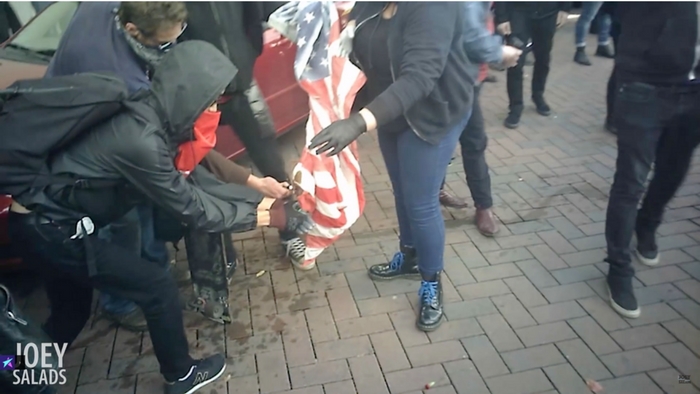 For the most part, you and I can only guess what’s going on in the minds of those behind the lines of the other side (namely, ANTIFA). We see what the media shows us, and we listen to all the commentators, but with the lies and propaganda floating around, it’s hard to separate fact from fiction.

Youtube sensation and political activist Joey Salads decided that it would make for an eye opening experience if he were to infiltrate an ANTIFA rally and see what was really going on behind the masks. He did just that, and these are his results.

It’s a sad day in America when disagreeing on a political issue becomes a blank check to lash out violently. Salads went to the rally with the purpose of documenting who was acting outside the law and who was starting all the violence.

All the reports up to this time have been that the ANTIFA and BLM groups who rally in protest of President Trump are the ones instigating violence, but the media perpetually spins it or suppresses the information altogether. This seems to be proof positive that there’s no virtue among these vandals and bullies.

Isn’t it curious that the antifa came with gas masks, prepaired for war and except for the defenders behind the lines who were taking care of the wounded the trump supporters are in shorts and regular street clothes. There is a time and a place for expressing your political views to the other side of a given issue, but wearing a mask and throwing rocks might lead others to believe that you’re not interested in resolution as much as you’re just looking to fight and get your 15 mins of fame.

Except for that guy with the weed. Obviously, he was there to bring peace.