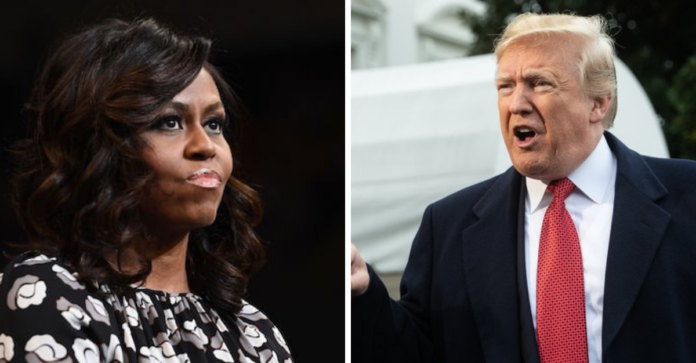 When asked about the book, Trump said that while he had not seen the book, he suspected that she had exaggerated to make herself more money, according to the Daily Mail.

“I haven’t seen it. I guess she wrote a book. She got paid a lot of money to write a book. And they always insist you come up with controversial – well I’ll give you a little controversy back,” he said.

“I’ll never forgive him for what he did to our United States military by not funding it properly.”

Yelling over the sound of Marine One behind him, Trump said, “It was depleted. Everything was old and tired,” Trump said, indicating to the military transport vehicle.

“And I came in, and I had to fix it, and I’m in the process of spending tremendous amounts of money, so I’ll never forgive him for what he did to our military.

“I’ll never forgive him for what he did in many other ways, which I’ll talk to you about in the future,” Trump said, offering little further explanation for what he eluded to.

“What he did, because you talked about safety, what he did to our military made this country very unsafe for you and you and you,” Trump told reporters.

Trump’s comments about a lack of forgiveness were doubtless in retaliation to Michelle Obama’s comments in her book about how she could never forgive Trump for what he did to her family while he was on the campaign trail.

Obama blasted Trump in her book, saying that she tried to “block it all out,” recalling her still live anger at Trump’s “birther” campaign, that hinged on his doubt that her husband, Barack Obama was really born in the United States.

Obama writes that she “will never forgive him” for the “crazy and mean-spirited claims” about her husband’s citizenship, the Daily Mail reported.

Obama claimed that his campaign had “underlying bigotry and xenophobia” and was “hardly concealed,” and “deliberately meant to stir up the wingnuts and kooks.”

“What if someone with an unstable mind loaded a gun and drove to Washington?” she asks.

“What if that person went looking for our girls? Donald Trump, with his loud and reckless innuendos, was putting my family’s safety at risk. And for this, I’d never forgive him.”