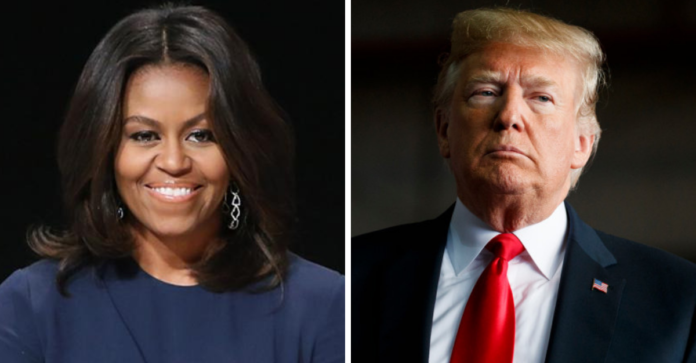 Former first lady Michelle Obama had some harsh words for President Donald Trump in her new book, “Becoming,” which is due out next week.

Obama called Trump a “misogynist” who used body language to “stalk” Hillary Clinton during a 2016 presidential debate, according to the New York Post.

She focused on Trump’s behavior on the debate stage here he somewhat followed Clinton on the stage as if to send the message: “I can hurt you and get away with it,” Obama said according to the post.

According to the Daily Mail, Obama denounced the president and also remembered that she “buzzed with fury” after watching Trump’s 2005 Access Hollywood tape,

The former first lady also blasted Trump’s “birther” campaign in which he questioned her husband’s citizenship, which she called bigoted and dangerous. She said that “he deliberately meant to stir up the wingnuts and kooks.”

Obama did say that she had assumed that Trump was “grandstanding” when he announced his intention to run for President in 2015.

She also said she was in disbelief of the number of women who supported the president in his run for office. According to the Daily Mail, she didn’t understand why a woman would choose a “misogynist” over Hillary Clinton, “an exceptionally qualified female candidate.”

The book is expected to be a “publishing phenomenon” and was commissioned under a joint deal with the former first lady and former president in a book deal that earned them a $65 million advance. The former president’s book is due out sometime next year.

The Daily Mail reported that a book tour will be upcoming, and that fans will hear, “Mrs. Obama’s honest reflections on the experiences and events, both public and private, that have shaped her, from her childhood on the South Side of Chicago to her years as an executive balancing the demands of motherhood and work, to her years spent at the most famous address in the world.”