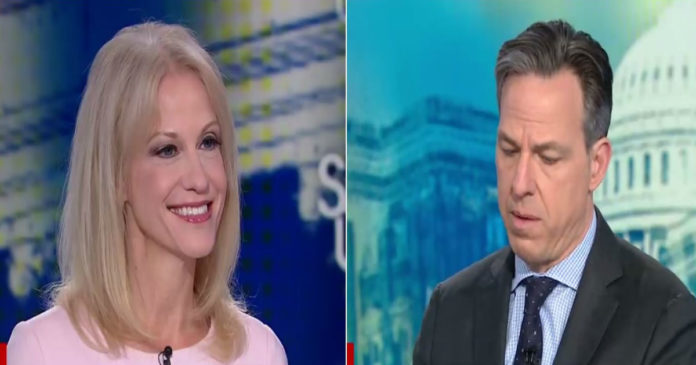 Trump originally said that he had no idea about the payment. The story worked until Rudy Giuliani admitted last week that Trump had already repaid the money.

“I know the president said he didn’t know it when it occurred. Now, respectfully I know that CNN has invested a lot in this story and in Ms. Daniels’ attorney. Mr. Avenatti He has appeared on your network over 65 times in less than two months, “ Conway said.

“That a choice that you make. When I look at the CNN polling, I don’t see this on there. I see the economy and immigration, health care. I see ISIS, historic talks on North Korea. We are on the precipice of ending decades of war between North Korea and South Korea in large part due to this presidents leadership.”

“Do you think his job includes lying to the American people. Because he continues to do so,” Tapper replied.

“You just want that to go viral. And you want to say President Trump and lie in the same sentence, “ Conway fired back.

President Trump’s defenders are coming out in droves. They have no choice, the left won’t stop attacking him. Democrats wanted trump to fail miserably. Some of them even hoped that he would be impeached by now.

Instead, Trump is doing extremely well. He’s actually accomplishing his agenda. Tensions with North Korea are cooling, the economy is thriving, and unemployment is plummeting.