Obama’s reign over America is about to come to an end, but not before he gets a few more America-destroying actions in place. Instead of being concerned over the very real threat of terror from Muslim refugees and terrorists that commit vile acts against US citizens, Obama tries to make it harder for law-abiding people to protect themselves and meets with Muslim leaders to show them that he’s “on their side.”

There’s a reason why the Paris attackers chose the most liberal parts of the city – it’s because they’re the most unprepared and willing to let things go when it comes to Muslim crime. They know that people wil have no way of protecting themselves, and that’s exactly why terrorists around the world will likely see Obama’s mosque visit as something that will tremendously help their evil cause. 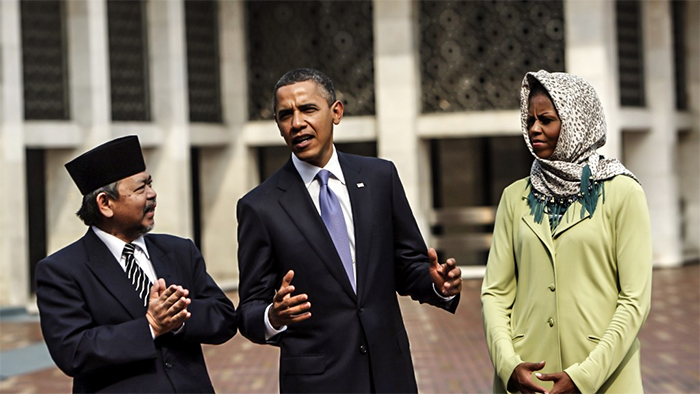 On Wednesday, President Obama will make his first visit to an American mosque since he assumed the nation’s highest office. The visit to a mosque in Baltimore next week is a part of the administration’s effort to address mounting hate crimes against Muslims and vitriolic anti-Muslim rhetoric from top political contenders.

Obama will visit the Islamic Society of Baltimore, located in Catonsville, Maryland, to “celebrate the contributions Muslim Americans make to our nation and reaffirm the importance of religious freedom to our way of life,” according to a White House statement. The statement did not specify why that particular mosque was selected.

The president has visited mosques around the world, and made his first visit to a synogogue in May.

Instead of visiting mosques and making sure everyone that agrees with Sharia Law is on your side, why not call it like it is and say that the most violent places in the world are Muslim countries, and that Sharia is completely incompatible with the US Constitution? I can’t see him saying that at all, but President Trump sure as hell won’t be scared of saying what needs to be said.