Liberals will always tell you that keeping the Earth green by using solar power is the best way to go. While I agree solar power is an excellent resource, it’s largely impossible to implement and sustain solar energy powerful enough to run entire parts of the country. Yea, planning, you’re not good at it liberals.

So what exactly would it take to power the U.S. with solar energy?

Here’s the Powerline Blog to give us just a fraction of what we’d need. The statistics are absolutely shocking! 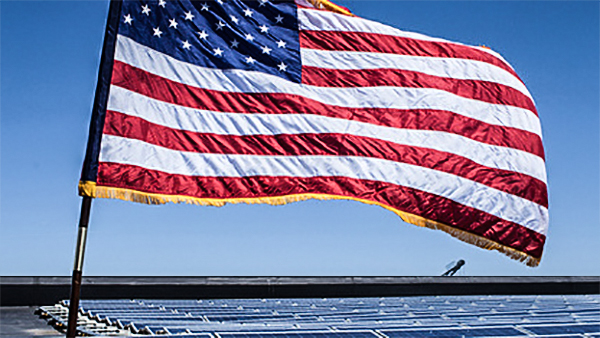 The basic “green” project is to replace our current fossil fuel and nuclear power plants with a combination of solar and wind energy. The cost consequences of making this transition to less efficient forms of energy are almost inconceivable, but putting cost to one side, is it even possible? At Watts Up With That?, Tom Tamarkin and Barrie Lawson have authored one of the more entertaining scientific articles I have read in a long time. They actually undertake to do the math: what would it require to replace existing fossil fuel and nuclear power plants with solar energy as current plants are phased out over the next several decades?

There are many variables, of course. For example, if electric vehicles ever gain a significant market share, the need for electric power will be vastly greater.

If located in the Northeast, where power demands are highest, the necessary solar panels would ‘[cover] an area of 44,000 square kilometers or a square with sides of 210 km. Bigger than Denmark, the Netherlands or Switzerland.’ If located in the Southwest, you could get away with a solar installation the size of Belgium, or 50% larger than Israel.

The amount of area that would cover is STAGGERING. There is no way that we could ever depend completely on solar energy. Especially if other electric needs go up at any point in time, which they are expected to in the next 100 years.

While a viable solution to foreign oil isn’t in sight, don’t let liberals tell you solar is the answer. It’s nice to put on your roof to reduce personal energy costs, but on the larger, nationwide scale, you backward, liberal, hippies don’t have a leg to stand on.