I don’t know what I dislike more: liberals or gun control lobbyists. Sometimes, they are one in the same, but there are some out there that don’t like guns at all, no matter their political affiliation.

Thus is the case in Honolulu, Hawaii. We’re not sure what these guys stand for, but it sure isn’t a pro-gun philosophy. The mayor of Honolulu, Kirk Caldwell, and the Honolulu Police Department just destroyed $575,000 worth of firearms. You read that number correctly. Over half a million dollars worth.

Why, you ask? Fox News has the answer.

Some 2,300 Smith & Wesson 9 mm handguns, including at least 200 that are brand-new and in unopened boxes, were issued to the city’s police department. But with the 2,200-member force upgrading to lighter and less expensive Glock 17s, the guns were set to be permanently holstered. While it is customary throughout the country for departments to auction the guns to law-abiding citizens, including the police who once carried them, or donate them to another department, Honolulu opted to destroy them.

‘Mayor Kirk Caldwell and the Honolulu Police Department agreed that they would not allow the guns to be sold to the general public and end up on the streets of Honolulu,’ Honolulu Police spokeswoman Michelle Yu told FoxNews.com. ‘The same goes for selling the individual gun parts that could have been used to assemble a gun.’

Not only is this a massive blunder on a epic scale, it also hurt the city financially. 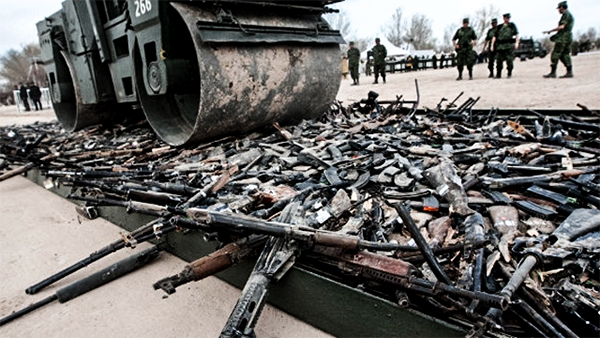 Selling the guns, with mandatory background checks to ensure they were only purchased by legal owners, could have netted the city $575,000, according to Hawaii News Now. Several police officers reportedly were interested in buying old service weapons for personal use, and the department has previously sold phased-out weapons to its staff, but this time opted to melt them down two weeks ago.

Just goes to show that when it comes to guns and gun control, you never know who will try to for the hand of the government. We need this to stop! Guns aren’t the problem. Let’s address the issue at it’s core and get nationwide support for the mentally unstable!