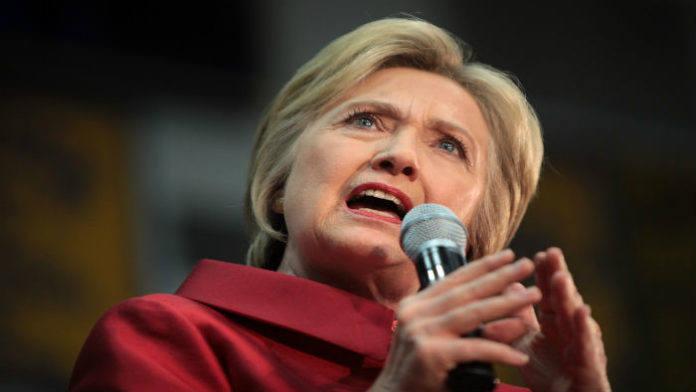 Hillary Clinton won’t shut up about the election. No one expected her to handle her defeat gracefully, but most people thought she would have moved on by now. It’s been almost a year and instead of talking about something on else she’s on a book tour.

Clinton’s book offers her perspective on why she lost. I thought it was obvious- she was an awful candidate.

Clinton’s so self-absorbed she thought it would be a good idea to honor the anniversary of the Benghazi terror attack by blaming the atrocity for her loss. Everybody and everything but Clinton herself is the reason she lost.

“Take the Benghazi tragedy—you know, I have one of the top Republicans, Kevin McCarthy, admitting we’re going to take that tragedy—because, you know, we’ve lost people, unfortunately, going back to the Reagan administration, if you talk about recent times, in diplomatic attacks,” Clinton whined to NBC.

“But boy, it was turned into a political football. And it was aimed at undermining my credibility, my record, my accomplishments.”

Michael Ingmire, the uncle of foreign service officer Sean Smith, who was killed in Benghazi, responded to her arrogant claim.

“She’s been in plausible deniability about Benghazi ever since it happened,” Ingmire said. “She was standing, basically before the coffins of Americans, blaming a horrible anti-Islamic video, but she’s just being consistent with her psychosis. The liar, the criminal, the crooked politician — those are the three faces of Hillary.”

Clinton’s incompetence as Secretary of State led to the deaths of four Americans and the only thing she thinks about is how much bad publicity resulted. Many people think she handled the crisis so badly she should be charged.

“It is disgusting for her to downplay it, and I think the American people knew it. She did nothing about it at the time, and this tragedy was entirely preventable, except her State Department was inept in protecting Americans in Benghazi,” Former Rep. Jason Chaffetz, R-Utah, told Fox News.

“I’m sure she can’t even look in the mirror and face the fact that, on her watch, they lost four Americans, and it’s disgusting she can’t live up to it, even today.”

It’s unsettling to remember how close Clinton was to becoming president. She’s a known liar that snaked her way into politics on her husband’s coattails.