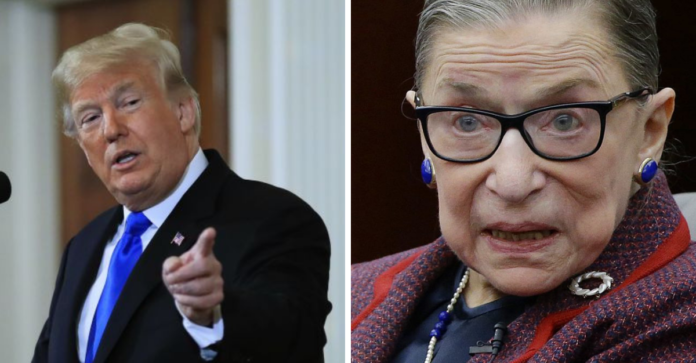 Following an injury sustained by Supreme Court Justice Ruth Bader Ginsburg, much of the nation wondered if President Donald Trump had his eye on a third Supreme Court nomination, should the court’s oldest justice become incapacitated.

The President, however, made it clear in a statement at the White House that he wishes nothing but health and wellness to Ginsburg.

“I wouldn’t say she’s exactly on my side, but I wish her well and hope she gets better and hope she serves in the Supreme Court for many, many years,” Trump said, according to the Daily Caller News Foundation.

Trump’s reference to Ginsburg negativity toward him was likely due to some comments she made while he was running for office in 2016.

When asked about the political outsider, the aging justice called Trump a “faker” and said she couldn’t imagine him winning.

Trump responded to her comments, tweeting that Ginsburg was an embarrassment for making “very dumb political statements about me. Her mind is shot — resign!”

She later retracted, and called her own comments “ill-advised” and promised to be “more circumspect.”

“On reflection, my recent remarks in response to press inquiries were ill-advised and I regret making them,” The justice said, according to The Associated Press.

Ginsburg’s injury caused her to miss a ceremony for the newly minted Supreme Court Justice Brett Kavanaugh, whose confirmation was so hotly disputed by many of the iconic feminist supporters.

Ginsburg was released from the hospital early on Friday, however, on Thursday, White House Counselor Kellyanne Conway said that Ginsburg would be in her prayers, and praised justice, according to the Daily Caller.

“I’ve known her for many, many years,” Conway said. “I got to see her just a few weeks ago here at the swearing-in of Justice Kavanaugh. I hope she has a full and speedy recovery.”