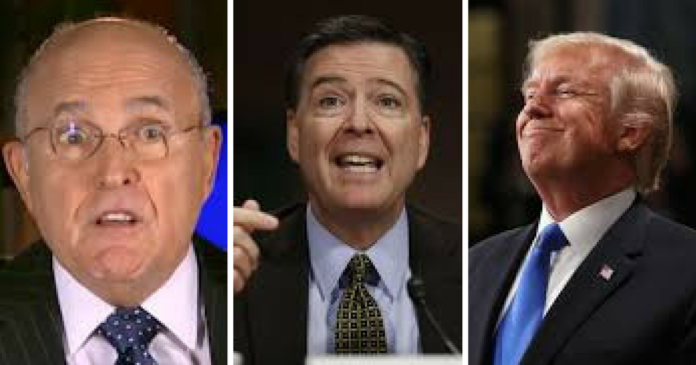 Rudy Giuliani is on a media blitz. His comments about President Trump and Trump’s lawyer are receiving the most attention, but he also had something interesting to say about fired FBI director James Comey.

Giuliani says that Comey was kicked out of the FBI because he refused to publicly vouch for Trump. He was fired because he “would not, among other things, say that he [Trump] wasn’t a target.”

This is good news. Trump originally said that he dismissed Comey because of “this Russia thing.” Democrats leaped to obstruction of justice. Now, it’s obvious what Trump meant. He was furious that head of the FBI refused to stand behind him.

“Comey had no answer for why he didn’t say this, even though he had done the same thing for Hillary,” Giuliani said. “So, you can’t blame the president for feeling, ‘I am not being treated the same way they were.’”

Comey should have faded into obscurity by now. However, he just released a book insulting the president and liberals are loving it.

“He lied three or four times… and also refused to clear – to say that the president wasn’t a target when, in fact, he had done that for Hillary Clinton,” Giuliani added.

“His handling of that was disgraceful… Now how he can be put up as a model of credibility? I mean, they’re dreaming if they think he’d ever get in court. We’d rip him apart.”

“I have an open mind about Bob,” Giuliani said.

“I don’t about Comey. I closed my mind about Comey. I know Comey much better. I have the indignity of unfortunately of having hired him for his first big job. I’m embarrassed that I hired him.”

Giuliani has become one of the most vocal members of Trump’s team.