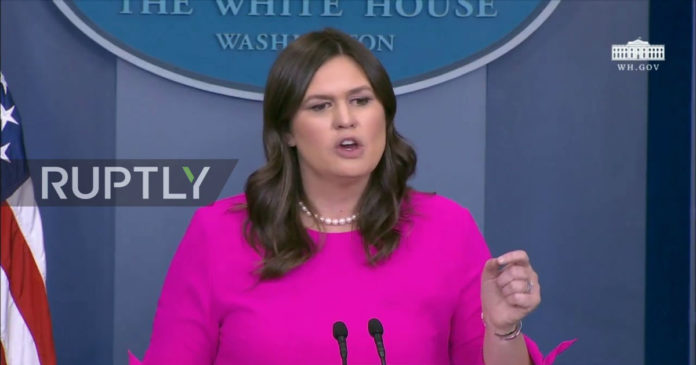 Don’t mess with Sarah Huckabee Sanders. The White House press secretary doesn’t hold back when she’s called on to defend the president.

A CNN hack tried to trip Sanders up Wednesday by asking her about Trump’s supposed hatred of the media.

“The Fake News is working overtime,” Trump had tweeted previously. “Why do we work so hard in working with the media when it is corrupt? Take away credentials?”

The tweet riled up the fake news providers, causing one of them to directly ask Sanders if she’d be willing to yank away press credentials.

“I’m standing up in front of you have right now taking your questions,” Sanders replied, adding that the current administration is incredibly accessible. Trump loves sharing real news with the public.

It wasn’t enough to satisfy the fake news bloodhound. She wanted soundbites that she could manipulate rather than real facts.

“How is the suggestion of taking American journalists press credentials away advocating for a free press in this country?” the reporter pressed Sanders.

“The fact that I’m standing here taking questions. The fact that the president took questions from your colleagues just two hours ago demonstrates this White House’s commitment to accessibility and to providing information to the American public,” the press secretary spat back.

She then listed a litany of grave mistakes that liberal media outlets had made just this week. She called out the New York Times and the Washington Post for peddling weakly-sourced, anti-Trump lies.

“We are here. We are taking questions. We are doing everything we can to provide regular and constant information to the American people and there is a responsibility by you guys to provide accurate information,” Sanders said.